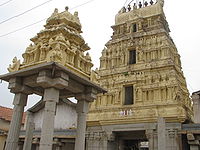 Bengaluru Rural District is one of the 30 districts in Karnataka , India. It was formed in 1986, when Bengaluru was divided into Bengaluru (Rural) and Bengaluru (Urban). Presently in Bengaluru Rural district, there are 2 divisions, 4 Talukas, 35 Hoblis (cluster of villages), 1,713 inhabited and 177 uninhabited villages, 9 towns, and 229 Gram Panchayats. Proximity to the city of Bengaluru has its own impact on the district, with a considerable daily commuting population. The rural people are mostly agriculturists, although with the advent of SEZs in the area, service and IT industries are booming. Devanahalli is set to be the site of a 95 billion Devanahalli Business Park, near the Bengaluru International Airport.

According to the 2001 census, the total population of the district was, 1,881,514 of which 21.65% were urban with a population density of 309 persons per km2. Bangalore Rural district has 22.5% of its population belonging to the Scheduled Caste and Scheduled Tribe. Hinduism is the major religion of this district. The Bengaluru Rural district is essentially an agriculture district but it has sufficient scope for Industrialisation, Dairy development and Sericulture.

It is the second least populous district in Karnataka (out of 30), after Kodagu.

The district is endowed with agricultural and horticultural crops such as ragi, rice, groundnut, sugarcane, castor, grapes, mulberry, etc. There are adequate infrastructural facilities such as transport and communications, banking, credit, and marketing. Though the region is not rich in mineral resources, its non-metallic mineral resources are utilised for bricks, tiles, and stoneware manufacture. For many years, weaving has also been a major occupation for a large section of the population. The soil and such climatic conditions are congenial for the cultivation of mulberry, rearing of silkworms, and production of silk, besides other agro-based industries. There are a number of wineries and quantity of production of wine has been increasing. There is a proposal by the Government of Karnataka to rename Bengaluru Rural district to Kempe Gowda. In September 2007, the taluks of Kanakapura, Ramanagara, Magadi and Channapatna were merged to form the Ramanagara district.