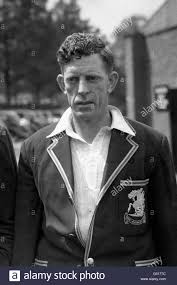 Bill Copson (27 April 1908 – 14 September 1971) was an English cricketer who played for Derbyshire between 1932 and 1950, and for England between 1939 and 1947. He took over 1,000 wickets for Derbyshire, and was prominent in their 1936 Championship season. Cricket correspondent, Colin Bateman, noted Copson was, “a flame-haired pace bowler with a temper to match, became a cricketer by accident”.

William Henry Copson was born in Stonebroom, Derbyshire, and became a miner. Like his fellow bowler, Tommy Mitchell, he was a cricketing product of the 1926 General Strike. He took no interest in cricket until the Strike, when some fellow miners persuaded him to join in cricket on the local recreation ground while they were absent from work. His ability as a bowler of considerable pace and exceptional straightness, who made the batsmen play every ball was clearly revealed. In the next season he was given a place in the Morton Colliery team and, from there, he progressed to Clay Cross club in the Derbyshire League, and his success was such that Derbyshire engaged him in 1932.

He made his debut in first-class cricket for Derbyshire against Surrey when he sensationally dismissed Andy Sandham with his first ball. However, his record for the rest of the season was moderate. In 1933, Copson became a regular member of the Derbyshire side, and, if he did not, in spite of his short run-up, possess the build to undertake as much work as fast bowlers were expected to then, he was consistently good in a summer unfavourable to bowlers. In the following two summers, Copson was so plagued by injury that there were serious worries about his long-term health. When he did play he developed so well that he headed Derbyshire’s averages in 1935, for a team that recorded more victories than any other Derbyshire side before or since.

Having been sent to Skegness to restore his health, he responded with a marvellous season in 1936. His 12 for 52 against the strong Surrey batting side on an admittedly damaged pitch was his finest feat. In all, he took 140 wickets for less than 13 runs each in the County Championship, and was chosen for the Ashes tour at the end of the season. Though he headed the averages for all matches, Copson’s body was not resilient enough for the timeless matches on rock-hard Australian pitches, and he did not play in any of the Tests.

In 1937, Copson suffered more injury problems, but featured one of the most magnificent bowling feats in county cricket history when he took 8 for 11 – including the first performance in first-class cricket of five wickets with six consecutive balls – against Warwickshire on a pitch giving bowlers almost no help. Copson also took 8 for 64 against Sussex on a good pitch, and the following year took 103 wickets, but could not dislodge Farnes and Bowes from the Test team. At last, Copson played his first Test against the West Indies in 1939 at Lord’s and did not disappoint, taking nine wickets on a blameless pitch, including five in the first innings. He took 146 wickets that year, but World War II put paid to him being a regular Test bowler. By 1946, he had lost a yard of pace, and, if he could bowl straighter than anyone, he had not the venom of pre-war years. Copson did play one Test in 1947 with almost no success, but retired at the age of 41 in 1949.