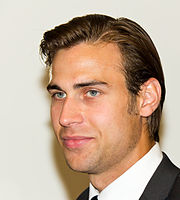 Christopher Zeller (born 14 September 1984) is a German national representative field hockey player. As of 2008, his current club is Rot-Weiss Kln. Zeller represented Germany in the 2004, 2008 and 2012 Summer Olympics.

Born in Munich, he is the younger brother of Philipp Zeller. Zeller was a member of the Men’s National Team that won the gold medal at the 2008 Summer Olympics and scored the only goal in the final. Two years earlier, he also won the 2006 Men’s Hockey World Cup where he scored two goals in the final match and was chosen as the Most Promising Player of the tournament.

Zeller played in the gold medal match for field hockey at the 2012 Olympics which Germany won.