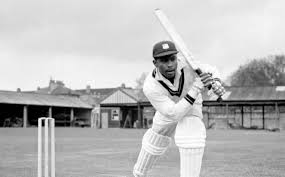 A hard-hitting batsman and off spin bowler, Smith was rated highly in West Indies. He idolised Jim Laker, for which reason he was nicknamed “Jim” for a time.

In his third first-class match, he hit 169 for Jamaica against the touring Australians in 1954-55, and was immediately included in the side for the First Test. He started his Test career scoring 104 on debut against Australia. But after a “pair” in the next match, he was dropped. He returned for the Fourth and Fifth Tests, and finished the series with 206 runs at 25.75 and 5 wickets at 68.00.

In England in 1957, he scored 161 in the First Test and 168 in the Third Test, once driving Brian Statham into the car park. He was chosen as one of the Wisden Cricketers of the Year; in his citation he was praised for his batting, bowling, and “magnificent fielding”.

The accident happened at 4:45am on 7 September, while he was travelling with his West Indian teammates Garry Sobers and Tom Dewdney. They were driving to London to attend a charity match, Sobers being the driver. The trip had already been delayed because of the traffic. The car ran into a 10-ton cattle truck driven by a Mr. Andrew Saunders. The accident happened on the A34 near Stone in Staffordshire.

Smith was sleeping in the back seat and was thrown forward. His injuries seemed minor initially and Smith even told Sobers, in reference to Dewdney, “Don’t worry about me. Look after the big fellow.” But his spine was injured badly and he soon went into a coma. He died without regaining consciousness three days later. His body was taken to Jamaica where 60,000 people attended the funeral. His tombstone in Jamaica’s May Pen Cemetery is engraved: “Keen Cricketer, Unselfish Friend, Worthy Hero, Loyal Disciple, Happy Warrior.” Sobers and Dewdney were not seriously injured, suffering lacerations and bruises.

Sobers was issued with a notice of intended prosecution. On 11 November at Stone Magistrates’ Court, Sobers was found guilty of careless driving. The prosecutor said that Sobers had failed to take a bend and was in collision with a cattle truck travelling in the opposite direction. Sobers was fined 10 with 16 17s costs and had his licence suspended for a month. Sobers pleaded not guilty, claiming that he had been dazzled by oncoming headlights.

A biography titled The Happy Warrior was written by Ken Chaplin a year after Smith’s death. He had the nicknames “Mighty Mouse” and “Wayside Preacher” because he liked reading the lesson in church.