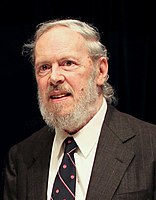 Dennis MacAlistair Ritchie (September 9, 1941 –  October 12, 2011) was an American computer scientist. He created the C programming language and, with long-time colleague Ken Thompson, the Unix operating system and B programming language. Ritchie and Thompson were awarded the Turing Award from the ACM in 1983, the Hamming Medal from the IEEE in 1990 and the National Medal of Technology from President Bill Clinton in 1999. Ritchie was the head of Lucent Technologies System Software Research Department when he retired in 2007. He was the “R” in K&R C, and commonly known by his username dmr.

Dennis Ritchie was born in Bronxville, New York. His father was Alistair E. Ritchie, a longtime Bell Labs scientist and co-author of The Design of Switching Circuits on switching circuit theory. As a child, Dennis moved with his family to Summit, New Jersey, where he graduated from Summit High School. He graduated from Harvard University with degrees in physics and applied mathematics.

In 1967, Ritchie began working at the Bell Labs Computing Sciences Research Center, and in 1968, he defended his PhD thesis on “Program Structure and Computational Complexity” at Harvard under the supervision of Patrick C. Fischer. However, Ritchie never officially received his PhD degree.

During the 1960s, Ritchie and Ken Thompson worked on the Multics operating system at Bell Labs. Thompson then found an old PDP-7 machine and developed his own application programs and operating system from scratch, aided by Ritchie and others. In 1970, Brian Kernighan suggested the name “Unix”, a pun on the name “Multics”. To supplement assembly language with a system-level programming language, Thompson created B. Later, B was replaced by C, created by Ritchie, who continued to contribute to the development of Unix and C for many years.

During the 1970s, Ritchie collaborated with James Reeds and Robert Morris on a ciphertext-only attack on the M-209 US cipher machine that could solve messages of at least 2000-2500 letters. Ritchie relates that, after discussions with the NSA, the authors decided not to publish it, as they were told that the principle was applicable to machines still in use by foreign governments.

Ritchie was also involved with the development of the Plan 9 and Inferno operating systems, and the programming language Limbo.

As part of an AT&T restructuring in the mid-1990s, Ritchie was transferred to Lucent Technologies, where he retired in 2007 as head of System Software Research Department.

Ritchie is best known as the creator of the C programming language, a key developer of the Unix operating system, and co-author of the book The C Programming Language; he was the ‘R’ in K&R (a common reference to the book’s authors Kernighan and Ritchie). Ritchie worked together with Ken Thompson, who is credited with writing the original version of Unix; one of Ritchie’s most important contributions to Unix was its porting to different machines and platforms. They were so influential on Research Unix that Doug McIlroy later wrote, “The names of Ritchie and Thompson may safely be assumed to be attached to almost everything not otherwise attributed.”

Ritchie liked to emphasize that he was just one member of a group. He suggested that many of the improvements he introduced simply “looked like a good thing to do,” and that anyone else in the same place at the same time might have done the same thing.

Nowadays, the C language is widely used in application, operating system, and embedded system development, and its influence is seen in most modern programming languages. Unix has also been influential, establishing computing concepts and principles that have been widely adopted.

In an interview from 1999, Ritchie clarified that he saw Linux and BSD operating systems as a continuation of the basis of the Unix operating system, and as derivatives of Unix:

I think the Linux phenomenon is quite delightful, because it draws so strongly on the basis that Unix provided. Linux seems to be among the healthiest of the direct Unix derivatives, though there are also the various BSD systems as well as the more official offerings from the workstation and mainframe manufacturers.

In the same interview, he stated that he viewed both Unix and Linux as “the continuation of ideas that were started by Ken and me and many others, many years ago.”

In 1983, Ritchie and Thompson received the Turing Award “for their development of generic operating systems theory and specifically for the implementation of the UNIX operating system”. Ritchie’s Turing Award lecture was titled “Reflections on Software Research”. In 1990, both Ritchie and Thompson received the IEEE Richard W. Hamming Medal from the Institute of Electrical and Electronics Engineers (IEEE), “for the origination of the UNIX operating system and the C programming language”.

In 1997, both Ritchie and Thompson were made Fellows of the Computer History Museum, “for co-creation of the UNIX operating system, and for development of the C programming language.”

On April 21, 1999, Thompson and Ritchie jointly received the National Medal of Technology of 1998 from President Bill Clinton for co-inventing the UNIX operating system and the C programming language which, according to the citation for the medal, “led to enormous advances in computer hardware, software, and networking systems and stimulated growth of an entire industry, thereby enhancing American leadership in the Information Age”.

In 2005, the Industrial Research Institute awarded Ritchie its Achievement Award in recognition of his contribution to science and technology, and to society generally, with his development of the Unix operating system.

In 2011, Ritchie, along with Thompson, was awarded the Japan Prize for Information and Communications for his work in the development of the Unix operating system.

Dennis Ritchie with Doug McIlroy (left) in May 2011

Ritchie was found dead on October 12, 2011, at the age of 70 at his home in Berkeley Heights, New Jersey, where he lived alone. First news of his death came from his former colleague, Rob Pike. The cause and exact time of death have not been disclosed. He had been in frail health for several years following treatment for prostate cancer and heart disease. News of Ritchie’s death was largely overshadowed by the media coverage of the death of Apple co-founder Steve Jobs, which occurred the week before.

Ritchie was under the radar. His name was not a household name at all, but… if you had a microscope and could look in a computer, you’d see his work everywhere inside.

In an interview shortly after Ritchie’s death, long time colleague Brian Kernighan said Ritchie never expected C to be so significant. Kernighan told The New York Times “The tools that Dennis builtand their direct descendantsrun pretty much everything today. Kernighan reminded readers of how important a role C and Unix had played in the development of later high-profile projects, such as the iPhone. Other testimonials to his influence followed.

Reflecting upon his death, a commentator compared the relative importance of Steve Jobs and Ritchie, concluding that ” work played a key role in spawning the technological revolution of the last forty years including technology on which Apple went on to build its fortune.” Another commentator said, “Ritchie, on the other hand, invented and co-invented two key software technologies which make up the DNA of effectively every single computer software product we use directly or even indirectly in the modern age. It sounds like a wild claim, but it really is true.” Another said, “many in computer science and related fields knew of Ritchies importance to the growth and development of, well, everything to do with computing,…”

The Fedora 16 Linux distribution, which was released about a month after he died, was dedicated to his memory. FreeBSD 9.0, released January 12, 2012 was also dedicated in his memory.

Asteroid 294727 Dennisritchie, discovered by astronomers Tom Glinos and David H. Levy in 2008, was named in his memory. The official naming citation was published by the Minor Planet Center on 7 February 2012 (M.P.C. 78272).