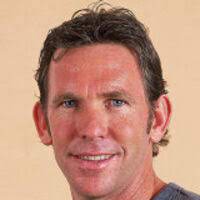 Dermot Alexander Reeve OBE (born 2 April 1963) is an English former cricketer, best known as an unorthodox all-rounder and captain and, most recently, coach of the New Zealand side, Central Districts.

Reeve played in three Tests and 29 One Day Internationals (ODI) for England. He played English county cricket for Sussex, Warwickshire and Somerset. He is a former Hong Kong sports personality of the year, gained for his cricketing efforts in that country.

Reeve was born in Hong Kong in 1963 to parents who working in the territory as teachers. His mother, Monica, later served as a scorer for a number of England Test matches. He also played for KJS football team alongside captain of the team Steven Markbreiter, who now coaches the Hong Kong based team Sai Kung Bulldogs.

Reeve first played cricket in England as a member of the Marylebone Cricket Club (MCC) Young Cricketers – an academy of up and coming young players between the ages of 18 and 20, who are based at Lord’s. He signed for Sussex in June of the 1983 English season, and took 42 wickets in the County Championship at 29.35 apiece. He was given little opportunity with the bat and batted at number 10 but performed the duties of night watchman. This helped Reeve show his batting ability where in this role he made his maiden first class hundred against Surrey at Guildford. He remained with Sussex for six seasons, his most successful being 1987, when he managed a batting average of over 40 and took 42 wickets at under 30.

His lack of a high enough batting position at Sussex led to his move to Warwickshire in 1988, and it was here that he gained his greatest successes. In the batsman-friendly summer of 1990, he averaged 54, making his highest first-class score of 202 not out (against an attack including Curtly Ambrose), and making two other centuries on the way to a total of 1,412 runs. He averaged over 40 for Warwickshire during his time at the Midlands club proving the move a good decision and helping him gain international selection. Reeve was made captain in 1993, and in 1994 led the county to an unprecedented domestic treble, winning the County Championship, the AXA Equity and Law League and the Benson & Hedges Cup, only being defeated in the final of the NatWest Trophy. This achievement came despite well-publicised differences of opinion with Warwickshire’s star batsman, Brian Lara, vividly described a few years later by Reeve in his book Winning Ways. He was known for his inventive cricket brain and once held the bat left handed and swept Ravi Shastri against Glamorgan. Today known as the switch hit. One of his improvisations against left-arm spinner, Rajesh Maru, of Hampshire was to drop his bat to avoid being caught out by the close fielders.

The following season, Warwickshire retained their Championship and NatWest Trophy crowns, but Reeve left Warwickshire after playing until halfway through the 1996 season. Reeve made over 400,000 tax free during his benefit year with Warwickshire. Reeve was named as one of the Wisden Cricketers of the Year in 1996, and received the OBE for services to cricket that same year. He moved on to become coach to Somerset (for whom he also played several games in one-day cricket in 1998), and also began to work in television cricket commentary for Channel 4.

Reeve played for Hong Kong at the 1982 ICC Trophy, averaging 34.50 with the bat and 15.71 with the ball. He returned to international cricket in 1991, playing for England. Reeve played only three Test matches for England, but his improvising style was better suited to One Day Internationals and he made 29 appearances in this form of the game, appearing in both the 1992 and 1996 World Cups. However, he never scored highly in ODIs, and his batting average would have been considerably lower, but for his high proportion of not-out innings.

Following his retirement from cricket, Reeve was involved with the Channel 4 broadcasting coverage of cricket from the start when the channel won the rights from the BBC to show England Tests in the UK. Duties included fronting the studio discussions with pundits, commentary, introducing and presenting awards after televised matches, and interviewing both present and past players. In May 2005, Reeve admitted that he had an addiction to cocaine, and had used the drug prior to commentating on the 2004 first Test between England and New Zealand at Lord’s. Reeve duly quit Channel Four after working for five years as part of their commentary team. He also admitted to using marijuana whilst he was an active player for Warwickshire but only out of season.

In more recent years, Reeve has worked as a commentator on the BBC radio show Test Match Special. He also commentated on the Indian Premier League (IPL) English-language television coverage.

“Following his cocaine revelations in 2005, Reeve’s family, built a new life in Australia and New Zealand. Their assets included a $3 million waterfront mansion at Clontarf.

Further scandal was to follow Reeve at the end of 2009, when he was exposed as a seller of Donald Bradman “signatures” on plain card which were later confirmed by the Bradman Museum to be poor copies of the original Legend’s signature.

In July 2008, Reeve was named the coach of the Central Districts and had relocated with his family to New Zealand two years prior. Despite leading the side to the Plunket Shield four-day final in 2008-09 before winning the 2009-10 Twenty20 competition, his tenure as coach was at times controversial, one particular incident seeing him fined and censured for accusing England international Ravi Bopara of ball-tampering during a domestic one-day match. On 7 April 2010, he ended his stint as coach of the Stags by mutual consent to spend time with his family, now living in Sydney, Australia.

He served as an assistant coach for the Pune Warriors India in the 2011 Indian Premier League.