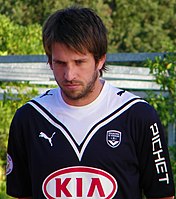 Diego Rodolfo Placente (born 24 April 1977) is a former Argentine footballer who played as a left-back.

Born in Buenos Aires, Placente started playing professionally in 1996 with Argentinos Juniors, before moving to Argentine giant River Plate in 1997. He transferred to Bayer 04 Leverkusen in 2001, where he played until 2005 when his contract expired. Subsequently, he turned down an offer from English club Everton FC to join Celta de Vigo. While at Leverkusen he played in the 2002 UEFA Champions League Final.

He played his first match with the Argentina national football team in 2001, and was capped 22 times.

Placente is married and his wife is Jewish. Because of this, he was subject of transfer talk to Israeli club Maccabi Tel Aviv. It was his wife though who was uninterested in moving to Israel, and the transfer never took place.[5]