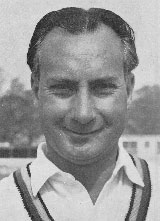 Cricket writer, Colin Bateman, noted, “A polished batsman who relished taking on fast bowlers, he became the heaviest scorer in Worcestershire’s history with more than 37,000 first-class runs to his credit”.

Kenyon was born in Wordsley, Staffordshire and lived most of his adult life in nearby Wollaston, West Midlands. He played all his county cricket for Worcestershire, but when international opportunities came along, Kenyon was unable to produce his run-making abilities on the highest stage. He fell in single figures in eleven of his fifteen England innings, although his Test career was rather sporadic in nature. Kenyon played three Tests on the 1951/52 tour to India, two more in 1953, with three more appearances in 1955, but life in the fast lane did not seem to suit his temperament.

He was a popular and successful captain of his county, and went on in his later life to become an England Test selector, and president of his beloved county side.