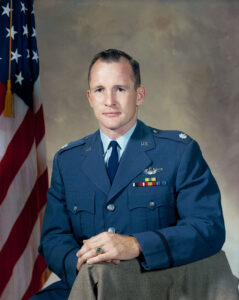 Edward Higgins White II (November 14, 1930 – January 27, 1967) (Lt Col, USAF) was an American aeronautical engineer, U.S. Air Force officer, test pilot, and NASA astronaut. On June 3, 1965, he became the first American to walk in space in Gemini 4. White died along with astronauts Virgil “Gus” Grissom and Roger B. Chaffee during prelaunch testing for the first crewed Apollo mission at Cape Canaveral. He was awarded the NASA Distinguished Service Medal for his flight in Gemini 4 and was then awarded the Congressional Space Medal of Honor posthumously.

White was born on November 14, 1930, in San Antonio, Texas, to parents Edward Higgins White Sr. (1901-1978), a West Point graduate and major general in the U.S. Air Force, and Mary Rosina White (née Haller; 1900-1983). His interest in aviation was sparked after his father allowed him to fly in a T-6 trainer at the age of twelve. He became a member of the Boy Scouts of America, where he earned the rank of Second Class Scout. Due of the nature of his father’s job, White’s family moved often to different military bases across the country throughout his childhood, and eventually settled in Washington, D.C., where he attended Western High School. After graduating in 1948, he was accepted to the United States Military Academy at West Point, where in 1952 he graduated with a Bachelor of Science degree.

While at West Point, White competed for a spot on the 1952 U.S. Olympic team in the 400 meter hurdles race, but missed making the team by 4/10 second. White was also a half-back on the West Point soccer team. His hobbies included squash, handball, swimming, golf, and photography.

White joined the Air Force, and received his initial pilot training at Bartow Air Force Base, Florida, and his jet training at James Connally Air Force Base, Texas. After gaining his wings in 1953, White was commissioned as a Second Lieutenant, and was sent to Luke Air Force Base, Arizona for Fighter Gunnery School. He was then assigned to the 22nd Fighter Day Squadron at Bitburg Air Base, West Germany. Among his colleages were Buzz Aldrin, who was a year ahead of him at West Point. He spent three and a half years there flying in F-86 Sabre and F-100 Super Sabre squadrons in the defense of NATO.

In 1957, White read an article about the future of astronauts, and he decided to become an astronaut. He believed that getting an advanced degree would improve his chances of becoming selected. In 1958, White enrolled in the University of Michigan under Air Force sponsorship to study aeronautical engineering, where he received his Master of Science degree in 1959. After it became clear that being a test pilot would improve his chances of becoming selected as an astronaut, he attended the U.S. Air Force Test Pilot School at Edwards Air Force Base, California in July 1959. He earned his credentials as a test pilot and was assigned to the Aeronautical Systems Division at Wright-Patterson Air Force Base, Ohio. There, he did flight tests for weapons development, and helped make recommendations for aircraft design. As weightlessness and extended flight training captain, he also piloted the planes used to train astronauts in weightlessness, such as the C-131, the C-135, and the F-100F. Some of his passengers included John Glenn, the first American to orbit Earth, and Ham, the first hominid in space. During his career, White would log more than 3,000 flight hours with the Air Force, including about 2,200 hours in jets, and would ultimately attain the rank of Lieutenant Colonel.

In 1953, White married Patricia Finegan, whom he met at a West Point football game. The Whites had two children, Edward White III (born September 16, 1953) and Bonnie Lynn White (born May 15, 1956). White was a devout Methodist.

Edward White during EVA. During the Gemini 4 mission, White became the first American astronaut to perform a spacewalk

White was one of nine men chosen as part of the second group of astronauts in 1962. Within an already elite group, White was considered to be skilled by the management of NASA. He was selected to be Pilot of Gemini 4, serving alongside Command Pilot James McDivitt.

On June 3, 1965, the Gemini 4 crew was launched into space to begin its four-day mission. After separation from the Titan II upper stage, McDivitt attempted to rendezvous with the booster. However, this was unsuccessful since the astronauts were not adequately trained to rendezvous in orbit. The objective had to be abandoned since the allocated propellant had been used up, and the maneuvers had pushed the spacecraft’s orbit too far away from Earth.

After the failed rendezvous attempt, White appeared tired and hot, so the EVA was postponed from the second revolution to the third revolution. At 19:46 UTC, White became the first American to make a walk in space. During his spacewalk, White used an oxygen propelled gun called the Hand-Held Maneuvering Unit to propel himself. White found the experience so exhilarating that he was reluctant to terminate the EVA at the allotted time, and had to be ordered back into the spacecraft. While he was outside, a spare thermal glove floated away through the open hatch of the spacecraft, becoming an early piece of space debris in low Earth orbit, until it burned up upon re-entry into the Earth’s atmosphere. There was a mechanical problem with the hatch mechanism, which made it difficult to open and to relatch. Luckily, McDivitt was able to get the door locked by using his glove to push on the gears that controlled the mechanism. This added to the time constraint of the spacewalk and could have threatened the lives of both men if McDivitt had been unable to get the hatch latched, as they could not re-enter the atmosphere with an unsealed hatch.

I’m coming back in… and it’s the saddest moment of my life.

Astronaut Edward H. White while reentering the spacecraft after his EVA,

The mission also included 11 different scientific experiments, including the use of a sextant for celestial navigation.

White’s next assignment after Gemini 4 was as the backup for Gemini 7 Command Pilot Frank Borman. He was also named the astronaut specialist for the flight control systems of the Apollo Command/Service Module. By the usual procedure of crew rotation in the Gemini program, White would have been in line for a second flight as the command pilot of Gemini 10 in July 1966, which would have made him the first of his group to fly twice.

In March 1966 White was selected as senior pilot (second seat) for the first crewed Apollo flight, designated AS-204. His fellow astronauts would be Command Pilot Virgil “Gus” Grissom, who had flown in space on the Liberty Bell 7 Mercury mission and as Commander of the Molly Brown Gemini mission, and Pilot Roger Chaffee, who had yet to fly into space. The mission, which the men named Apollo 1 in June, was originally planned for late 1966 to rendezvous with the last Gemini mission, but the impracticality of making the Gemini capsule and systems compatible with Apollo and delays in the spacecraft development pushed the launch into 1967.

The launch of Apollo 1 was planned for February 21, 1967. The crew entered the spacecraft at 1:00;pm on January 27, mounted atop its Saturn IB booster on Launch Pad 34 at Cape Kennedy, for a “plugs-out” test of the spacecraft, which included a rehearsal of the launch countdown procedure. While the test’s progress was delayed by problems with a cabin odor and poor communications, a fire broke out at 6:31;pm in the pure oxygen-filled cabin, killing all three men.

White’s job was to open the hatch cover in an emergency, which he apparently tried to do; his body was found in his center seat, with his arms reaching over his head toward the hatch. Removing the cover to open the hatch was impossible because the plug door design required venting normally slightly greater-than-atmospheric pressure and pulling the cover into the cabin. Grissom was unable to reach the cabin vent control to his left, where the fire’s source was located. The intense heat raised the cabin pressure even more, to the point where the cabin walls ruptured. The astronauts were killed by asphyxiation, smoke inhalation, and thermal burns.

The fire’s ignition source was determined to be a spark that jumped from a wire on the far left of the spacecraft, under Grissom’s seat, but their deaths were attributed to a wide range of lethal hazards in the early Apollo Command Module design, workmanship and conditions of the test, including the highly pressurized 100% oxygen pre-launch atmosphere, many wiring and plumbing flaws, flammable materials used in the cockpit and the astronauts’ flight suits, and a hatch which could not be quickly opened in an emergency. After the incident, these problems were fixed, and the Apollo program carried on successfully to reach its objective of landing men on the Moon.

White was buried with full military honors at West Point Cemetery while Grissom and Chaffee are both buried in Arlington National Cemetery.

In 1997, White was posthumously awarded the Congressional Space Medal of Honor. White was inducted into the U.S. Astronaut Hall of Fame in 1993 and the National Aviation Hall of Fame on July 18, 2009.

White’s wife Patricia received $100,000 from the life insurance portion of the contract the astronauts signed to give two publishing firms exclusive rights to the stories and photographs of the astronauts and their families. She also received $16,250 annually for the life of the contract. Patricia later remarried and continued to reside in Houston. On September 7, 1983, she committed suicide after surgery earlier in the year to remove a tumor.

White and McDivitt were presented honorary doctorate degrees in astronautical science by the University of Michigan after their Gemini 4 flight. Later that week they traveled to the White House where President Johnson presented them the NASA Exceptional Service Medal. The duo were also awarded the Arnold Air Society’s John F. Kennedy Trophy. White received the 1965 General Thomas D. White National Defense Award for his spacewalk. It is a trophy given by the National Geographic Society to outstanding air force personnel. He was inducted into the Aerospace Primus Club (the “most exclusive club on Earth”) for his EVA. The Apollo 1 crew was awarded the NASA Distinguished Service Medal posthumously in a 1969 presentation of the Presidential Medal of Freedom to the Apollo 11 crew.

White, along with nine other Gemini astronauts, was inducted into the International Space Hall of Fame in 1982. President Clinton presented the White and Chaffee families with the Congressional Space Medal of Honor in 1997 (Grissom’s family received the medal in 1978).

Many schools have been named in honor of Lt Colonel White:

Accomplishments in Space Commemorative Issue of 1967

The Omega Speedmaster wristwatch reference 105.003 has come to be known as the “Ed White” as this reference was worn by White during his spacewalk. The Speedmaster remains the only watch qualified by NASA for EVA use.

White was played by Steven Ruge in the 1995 film Apollo 13, by Chris Isaak in the 1998 HBO miniseries From the Earth to the Moon, and by Matt Lanter in the 2015 ABC TV series The Astronaut Wives Club. In 2018, he was portrayed by Jason Clarke in First Man.