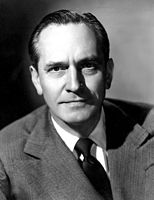 March is the only actor to have won both the Academy Award and the Tony Award twice.

March was born in Racine, Wisconsin, the son of Cora Brown Marcher (1863-1936), a schoolteacher, and John F. Bickel (1859-1941), a devout Presbyterian Church elder who worked in the wholesale hardware business. March attended the Winslow Elementary School (established in 1855), Racine High School, and the University of Wisconsin Madison where he was a member of Alpha Delta Phi. He began a career as a banker, but an emergency appendectomy caused him to re-evaluate his life, and in 1920, he began working as an extra in movies made in New York City, using a shortened form of his mother’s maiden name. He appeared on Broadway in 1926, and by the end of the decade, signed a film contract with Paramount Pictures. March served in the United States Army during World War I as an artillery lieutenant.

March received an Oscar nomination for the 4th Academy Awards in 1930 for The Royal Family of Broadway, in which he played a role modeled on John Barrymore. He won the Academy Award for Best Actor for the 6th Academy Awards in 1932 for Dr. Jekyll and Mr. Hyde (tied with Wallace Beery for The Champ, although March accrued one more vote than Beery). This led to roles in a series of classic films based on stage hits and classic novels like Design for Living (1933) with Gary Cooper and Miriam Hopkins; Death Takes a Holiday (1934); Les Misrables (1935) with Charles Laughton; Anna Karenina (1935) with Greta Garbo; Anthony Adverse (1936) with Olivia de Havilland; and as the original Norman Maine in A Star is Born (1937) with Janet Gaynor, for which he received his third Oscar nomination.

Warner Baxter, June Lang and March in The Road to Glory (1936) March resisted signing long-term contracts with the studios, enabling him to play roles in films from a variety of studios. He returned to Broadway after a ten-year absence in 1937 with a notable flop, Yr. Obedient Husband, but after the success of Thornton Wilder‘s The Skin of Our Teeth he focused as much on Broadway as on Hollywood. He won two Best Actor Tony Awards: in 1947 for the play Years Ago, written by Ruth Gordon; and in 1957 for his performance as James Tyrone in the original Broadway production of Eugene O’Neill‘s Long Day’s Journey Into Night. He also had major successes in A Bell for Adano in 1944 and Gideon in 1961, and played Ibsen’s An Enemy of the People on Broadway in 1951. During this period he also starred in films, including I Married a Witch (1942) and Another Part of the Forest (1948), and won his second Oscar in 1946 for The Best Years of Our Lives.

March also branched out into television, winning Emmy nominations for his third attempt at The Royal Family for the series The Best of Broadway as well as for television performances as Samuel Dodsworth and Ebenezer Scrooge. On March 25, 1954, March co-hosted the 26th Annual Academy Awards ceremony from New York City, with co-host Donald O’Connor in Los Angeles.

March’s neighbor in Connecticut, playwright Arthur Miller, was thought to favor March to inaugurate the part of Willy Loman in the Pulitzer Prize-winning Death of a Salesman (1949). However, March read the play and turned down the role, whereupon director Elia Kazan cast Lee J. Cobb as Willy, and Arthur Kennedy as one of Willy’s sons, Biff Loman, two men that the director had worked with in the film Boomerang (1947). March later regretted turning down the role and finally played Willy Loman in Columbia Pictures‘s 1951 film version of the play, directed by Laslo Benedek, receiving his fifth and final Oscar nomination as well as a Golden Globe Award. March also played one of two leads in The Desperate Hours (1955) with Humphrey Bogart. Bogart and Spencer Tracy had both insisted upon top billing and Tracy withdrew, leaving the part available for March.

On February 12, 1959, March appeared before a joint session of the 86th United States Congress, reading of the Gettysburg Address as part of a commemorations of the 150th anniversary of Abraham Lincoln‘s birth.

March co-starred with Spencer Tracy in the 1960 Stanley Kramer film Inherit the Wind, in which he played a dramatized version of famous orator and political figure William Jennings Bryan. March’s Bible-thumping character provided a rival for Tracy’s Clarence Darrow-inspired character. In the 1960s, March’s film career proceeded with a performance as President Jordan Lyman in the political thriller Seven Days in May (1964) in which he co-starred with Burt Lancaster, Kirk Douglas, and Edmond O’Brien; the part earned March a Golden Globe nomination as Best Actor.

March made several spoken word recordings, including a version of Oscar Wilde‘s The Selfish Giant issued in 1945, in which he narrated and played the title role, and The Sounds of History, a twelve volume LP set accompanying the twelve volume set of books The Life History of the United States, published by Time-Life. The recordings were narrated by Charles Collingwood, with March and his wife Florence Eldridge performing dramatic readings from historical documents and literature.

Following surgery for prostate cancer in 1970, it seemed his career was over, yet he managed to give one last performance in The Iceman Cometh (1973), as the complicated Irish saloon keeper, Harry Hope. March was married to actress Florence Eldridge from 1927 until his death in 1975, and they had two adopted children. He died from prostate cancer, at age 77, in Los Angeles, California; he was buried at his estate in New Milford, Connecticut.

Throughout his life, he and his wife were supporters of the Democratic Party.