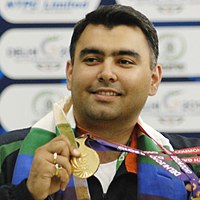 Gagan was born to Bhimsen Narang and his wife Amarjit to a Punjabi family in Chennai on the 6 May 1983.[6][7] His father is a retired chief manager of the Air India.[8] Gagan’s family hail from the Simla Gujran village of Haryana‘s Panipat district.[9] However, his father’s job assignments made them to shift from Panipat to Hyderabad, where he was brought up.[10] He did his schooling from the Gitanjali Senior School and attained his Bachelor of Computer Application degree from the Hyderabad‘s Osmania University.[11][12] He took to shooting when his father presented him an air pistol in 1997. He went about perfecting his shooting skills at the backyard of his home in Begumpet.[12] According to his father, Gagan showed early sparks of his shooting ability when, at the age of two, he shot a balloon with a toy pistol.[8]

In a pre-Olympic event in Hannover, Germany, Gagan shot an Air Rifle score higher than the world record, 704.3 as opposed to 703.1 set by Thomas Farnik of Austria in the World Cup 2006. Gagan Narang won 4 Gold medals at 2006 Commonwealth Games.

Narang qualified for the 2008 ISSF World Cup Final after he won a gold in the World Cup in China earlier in 2008. Gagan shot a perfect 600 in the qualification round. He scored 103.5 in the final round making total score of 703.5 to gain the universe record.[14][15] On 4 November 2008, he broke Austria‘s Thomas Farnik‘s record, set in the 2006 World Cup final in Granada, Spain. Gagan said his win was special because Barack Obama, who won the United States’ Presidential election on same day, was a source of inspiration.[16]

Narang added 4 Gold medals to the Indian tally at the 2010 Commonwealth Games in New Delhi. In the Men’s 10 m Air Rifle singles event, he shot a perfect 600 which was a new record.[17] Gagan also clinched a silver medal in his pet event at the Asian Games 2010. He also combined with Abhinav Bindra and Sanjeev Rajput to win the country another silver, in the team event behind champions, China. He won both of his silvers on the opening day of Asian Games.[18]

Narang won the bronze medal[2] in the 10m air rifle event at the 2012 London Olympics with a total score of 701.1 becoming India’s first medal winner at the 2012 games. Gagan was just behind the silver medallist Niccolo Campriani of Italy who scored 701.5, while the gold medallist Alin George Moldoveanu of Romania was at 702.1.[3]However he failed to qualify for the finals of the men’s 50-metre rifle three positions at the Royal Artillery Barracks.[19]

In August 2010, Narang had publicly expressed his displeasure after being ignored for the prestigious Rajiv Gandhi Khel Ratna award thrice and he threatened to skip the 2010 Commonwealth Games due to lack of motivation.[22] However, intense pressure from his family and fans, he later decided to participate.[23]

In recognition with his achievements, Narang was conferred with the Padma Shree Award in 2011.[24]Gagan Narang was selected for the prestigious Rajiv Gandhi Khel Ratna award for 2010. This is the highest sports award in the country.[25] He was conferred the award by then president Pratibha Patil on 29 August 2011.[26] Also Gagan Narang was invited by the organisers of the Indian Grand Prix to wave the chequered flag in the 2012 Indian Grand Prix.[27]