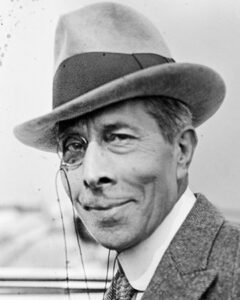 George Arliss (10 April 1868 – 5 February 1946) was an English actor, author, playwright and filmmaker who found success in the United States. He was the first British actor to win an Academy Award, as well as being the earliest-born actor to win one. Born in London and baptised as Augustus George Andrews but commonly listed as George Augustus Andrews, his relatives referred to him as Uncle Gus. Arliss was educated at Harrow. He started work in the publishing office of his father (William Joseph Arliss Andrews) but left at age eighteen to go on the stage. He began his acting career on the stage in the British provinces in 1887. By 1900, he was playing London’s West End in supporting roles. He embarked for a tour of America in 1901 in Mrs Patrick Campbell’s troupe. Intending to remain in the US only for the length of the tour, Arliss stayed for twenty years, eventually becoming a star in 1908 in The Devil. Producer George Tyler commissioned Louis Napoleon Parker in 1911 to write a play specifically tailored for Arliss, and the actor toured in Disraeli for five years, eventually becoming closely identified with the 19th century British prime minister.

Arliss made ten sound films exclusively for Warner Bros. under a contract that gave the star an unusual amount of creative control over his films. Curiously, his casting of actors and rewriting of scripts were privileges granted him by the studio that are not even mentioned in his contract. One of these films, The Man Who Played God (1932), was Bette Davis’s first leading role. Until the end of Davis’s life, she would credit Arliss for personally insisting upon her as his leading lady and giving her a chance to show her mettle. The two also co-starred in The Working Man in 1933. Arliss settled at Pangbourne in Berkshire. Film producer Darryl F. Zanuck tried to interest Arliss in returning to Hollywood to star in The Pied Piper in 1942. Braving the Luftwaffe’s Blitz on London throughout the war, Arliss remained in his native city. He died in Maida Hill, London, of a bronchial ailment on 5 February 1946, aged 77. His gravestone does not refer to his success in the performing arts, but recites the one achievement of which he was apparently most proud: an honorary Master of Arts degree he received from Columbia University in 1919.