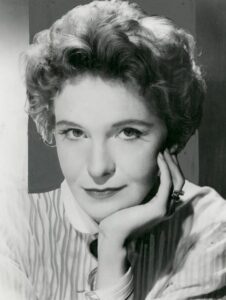 Page was born in Kirksville, Missouri. She was the daughter of Edna Pearl (ne Maize) and Leon Elwin Page, who worked at Andrew Taylor Still College of Osteopathy and Surgery (combined with the American School of Osteopathy, eventually to form A.T. Still University). He was an author whose works included Practical Anatomy (1925), Osteopathic Fundamentals (1926), and The Old Doctor (1932). She had a younger brother, Frederick.

After graduating from Chicago’s Englewood Technical Prep Academy in Chicago, Illinois, she attended the Goodman School of Drama at the Art Institute of Chicago (later renamed The Theatre School at DePaul University) in Chicago and later studied acting with Uta Hagen in New York City.

Page was a trained method actor and worked closely with Lee Strasberg. She began appearing in stock theatre at age 17. Her appearance as Alma in the 1952 production of Summer and Smoke, written by Tennessee Williams and staged at Circle in the Square Theatre in New York City’s Greenwich Village, was legendary.

Her work continued on Broadway as the spinster in the 19541955 production of The Rainmaker, written by N. Richard Nash; and as the frustrated wife whose husband becomes romantically obsessed with a young Arab, played by James Dean, in the 1954 production of The Immoralist, written by Augustus Goetz and Ruth Goetz and based on the novel of the same name (1902) by Andr Gide.

She earned critical accolades for her performance in the 1959 production of Williams’s Sweet Bird of Youth opposite Paul Newman. She originated the role of a larger-than-life, addicted, sexually voracious Hollywood legend trying to extinguish her fears about her career with a young hustler named Chance Wayne, played by Newman. For her performance, Page received her first nomination for the Tony Award for Best Actress in a Play, as well as the Sarah Siddons Award for her performance in Chicago. She and Newman later starred in the film adaptation of the same name (1962) and Page earned a nomination for the Academy Award for Best Actress for the film.

In 1964, she starred in a Broadway revival of Anton Chekhov‘s Three Sisters playing eldest sister Olga to Kim Stanley‘s Masha with Barbara Baxley as the interloper Natasha (Shelley Winters would later play this role in the film adaptation). Both Shirley Knight and Sandy Dennis played the youngest sister Irina at different stages in this production. It was directed by Lee Strasberg (and a version of it was preserved on film). In 1967, Page starred in Peter Shaffer‘s Black Comedy/White Lies, a production which also included Michael Crawford and Lynn Redgrave, who were making their Broadway debuts.

Page received a nomination for the Tony Award for Best Featured Actress in a Play (her second Tony Award nomination) for the 1975 production of Alan Ayckbourn‘s Absurd Person Singular with Sandy Dennis and Richard Kiley.

Page also starred as Zelda Fitzgerald in the last major Broadway production of a Williams play, Clothes for a Summer Hotel, which did not succeed financially on Broadway in 1980.

In 1973, she played Mary Todd Lincoln opposite Maya Angelou in the Broadway production of the two-character play Look Away, written by Jerome Kilty.

Page starred as the secretive nun Mother Miriam Ruth in the Broadway production of Agnes of God, which opened in 1982 and ran for 599 performances with Page performing in nearly all of them; for her role, she received a nomination for the Tony Award for Best Actress in a Play. In 1983, Page was inducted into the American Theater Hall of Fame.

Also in 1983, Geraldine Page invited the young actress Sabra Jones Strasberg to her dressing room at the Music Box, where Geraldine was playing the mother superior in Agnes of God, to advise Sabra in forming a classic theatre based on alternating repertory. This became the Mirror Theater Ltd with its repertory program the Mirror Repertory, and Geraldine accepted the role of Founding Artist in Residence. Page went on in that capacity until she died, performing in Inheritors by Susan Glaspell, Paradise Lost by Clifford Odets, Rain by John Colton (based on the short story “Miss Thompson” by W. Somerset Maugham), Vivat! Vivat Regina! by Robert Bolt (in which she played Elizabeth I),Clarence by Booth Tarkington, and The Madwoman of Chaillot (in which she played the Madwoman to great acclaim). She also appeared in The Circle by W. Somerset Maugham. It was during this production that she received the Academy Award for Best Actress for The Trip to Bountiful and thanked The Mirror Theater Ltd on worldwide television. She received the award from F. Murray Abraham, who, after winning his Oscar for Amadeus, also joined the Mirror Repertory Company to play the rag-picker in the Madwoman of Chaillot.

After winning an Academy Award in 1986, Page returned to Broadway in a revival of Nol Coward‘s Blithe Spirit as “Madame Arcati”. The production was Page’s last. She was again nominated for the Tony Award for Best Actress in a Play. She did not win, and several days after the awards ceremony, she died. The show lasted several weeks more, with co-star actress Patricia Conolly taking over Page’s role.

Geraldine’s official film debut and role in Hondo, opposite John Wayne, garnered her a nomination for the Academy Award for Best Supporting Actress. “Actually Hondo wasn’t my first movie. I had one small, but satisfactory scene in a Dan Dailey picture called Taxi, which was filmed in New York” – Geraldine Page. In all, despite her relatively small filmography, Page received eight Academy Award nominations. She finally won the Oscar in 1986 for her performance in The Trip to Bountiful, which was based on a play by Horton Foote.

When she won (F. Murray Abraham, upon opening the envelope, exclaimed, “I consider this woman the greatest actress in the English language”), she received a standing ovation from the audience. She was surprised by her win (she openly talked about being a seven-time Oscar loser), and took a while to get to the stage to accept the award because she had taken off her shoes while sitting in the audience. She had not expected to win, and her feet were sore. In 1963, Page starred in Toys in the Attic, based on Lillian Hellman’s play of the same name, and garnered a Golden Globe nomination. She received another nomination the following year starring in Delbert Mann’s Dear Heart as a self-sufficient but lonely postmistress visiting New York City for a convention, finding love with a greeting card salesman.

In 1969, Page appeared opposite Ruth Gordon in What Ever Happened to Aunt Alice?, the third and final film in the Robert Aldrich-produced trilogy which followed What Ever Happened to Baby Jane? (1962) and Hush Hush, Sweet Charlotte (1964). The film is based on the novel The Forbidden Garden from Ursula Curtiss and features Page as Claire Marrable, a recently widowed socialite, who, upon discovering that her husband has left her virtually nothing, hires a number of unsuspecting housekeepers whom she murders one by one and robs them of their life savings in order to keep up her extravagant lifestyle. However, her latest hire (Gordon) is determined to discover the whereabouts of one of the previous housekeepers.

She has also appeared in roles such as a repressed schoolmistress in the Clint Eastwood film The Beguiled; a charismatic evangelist (modeled after Aimee Semple McPherson) in The Day of the Locust; a nun, Sister Walburga, in Nasty Habits; and as “Aunt Beverly” in Harry’s War. Her final film was the 1987 Mary Stuart Masterson film My Little Girl, which featured the film debut of Jennifer Lopez. She also was a voice actress and voiced the villainous Madame Medusa in the Disney animated film The Rescuers.

She performed in various television shows in the 1950s through the 1980s, including movies and series, such as Hawaii Five-O, Kojak, and several episodes of Rod Serling‘s Night Gallery, including “The Sins of the Fathers” and “Something in the Woodwork”.

Page was married to violinist Alexander Schneider from 1954 to 1957. On September 8, 1963, she married actor Rip Torn, who was six years her junior, in Pinal, Arizona. They remained married until her death. Page bore him three children, a daughter (actress Angelica Page) and twin sons, actor Tony Torn, and Northern Arizona University professor John Torn.

Page, who suffered from kidney disease, died of a heart attack in 1987 during a run on Broadway in Sir Nol Coward‘s Blithe Spirit at the Neil Simon Theatre. She did not arrive for either of the show’s two June 13 performances; at the end of the evening performance, the play’s producer announced that she had died at the age of 62.

Her achievements as a stage actress and teacher were highlighted; actress Anne Jackson stated at the tribute that ” used a stage like no one else I’d ever seen. It was like playing tennis with someone who had 26 arms.” Rip Torn called her “Mi corazon, mi alma, mi esposa” (“My heart, my soul, my wife”) and said they had “never stopped being lovers, and … never will.” Page was cremated.