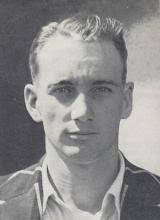 Hugh Joseph Tayfield (30 January 1929 – 24 February 1994) was a cricketer . He played 37 Test matches for South Africa from 1949 to 1960 and was one of the best off spinners the game has seen. He was the fastest South African to take 100 wickets in Tests (in terms of matches played) until Dale Steyn claimed the record in March 2008. He was named as one of the Wisden Cricketers of the Year in 1956. He was known as ‘Toey Tayfield’ due to his habit of stubbing his toes into the ground before every delivery. He would also kiss the badge on his cap before handing it to the umpire at the start of every over.

The Tayfields were a cricketing family and cricket was in his blood, Hugh’s uncle Sidney Martin played for Worcestershire and his brothers Arthur and Cyril both played for Transvaal as did two cousins.

Tayfield made his debut for Natal as a 17-year-old in 1945-46. He took a hat-trick against Transvaal aged just 18 and, when Athol Rowan was injured, he was hurried into the test team against Australia in 1949-50. He played in all five Tests and, on a sticky wicket at Durban, took seven for 23 when Australia crashed from 31 for no wicket to 75 all out. South Africa erred by not enforcing the follow on and Neil Harvey won the match for Australia.

After a quiet tour to England in 1951 when he was called up as a substitute for Rowan, he became South Africa’s mainstay in Australia in 1952-53 under Jack Cheetham. He claimed 30 scalps in the series, 13 of them at Melbourne to secure South Africa’s first win over Australia in 42 years. Tayfield returned to England with more success in 1955, taking 143 wickets on the tour and 26 in the series including nine in South Africa’s victory at Headingley. These efforts led him to achieve the number 1 ranking in ICC Test Bowlers ranking for 1955 (which he regained in 1957).In the defeat at the Oval, the match which decided the rubber, he took 5 for 60 in 53.3 overs.

Wheeling down eight-ball overs for South Africa v England at Durban in 1956-57, he bowled 119 balls in the first innings followed immediately by a further 18 in the second without conceding a run, a test and first class cricket record. He bowled over the wicket, close to the stumps, drifting the ball away from the bat in the air and then spinning it back through the gate. He did not spin the ball as much as England’s Jim Laker but was unerringly accurate and could bowl all day. He set himself aggressive fields, in contrast to his steady bowling, with two silly mid ons for the snick prompted by a botched drive through the tempting hole he’d left at cover. He formed a fine partnership with Trevor Goddard and, backed by South Africa’s athletic fielding, took 37 wickets at 17.18 against England in 1956-57. He took 9 for 113 in the second innings of the Fourth Test at Johannesburg, bowling unchanged on the last day, and was chaired off the field by his team mates. Tayfield caught the only batsman he didn’t dismiss himself – Doug Insole, the top-scorer with 68 – off Goddard.

In England in 1960 he took 123 wickets on the tour but failed in the Tests and, his career on the wane, lost his place in 1961-62. He cut a dashing figure in his 1950s heyday but, like many before and after him, struggled somewhat once the limelight was gone. He was married and divorced five times.

Tayfield died in a hospital at Durban on 25 February 1994, at the age of 65.  He was survived by his only son, Robert, from his marriage to Barbara Metcalf. His grandchildren are Derek and Janna followed by great grandchildren, Evangeline and Curran.

In 2015 Barbara Metcalf’s daughter-in-law, Susan, published “The Red Suitcase”. A novel based on Barbara’s and Hugh Tayfield’s courtship, marriage and her life following their divorce.