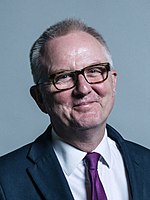 Ian Christopher Austin (born 6 March 1965) is a British politician who was the Member of Parliament (MP) for Dudley North from the 2005 general election until 2019. Formerly a member of the Labour Party, he resigned from the party on 22 February 2019 to sit as an independent. He served as Parliamentary Under-Secretary of State at the Department for Communities and Local Government from 2009 to 2010.

Austin was born on 6 March 1965[1] and was adopted as a baby by Dudley school teachers Fred and Margaret Austin. His adoptive father, Fred (a Czech Jew who was himself adopted by an English family on the Nazi invasion of Czechoslovakia), was head of the Dudley School from its formation in 1975 until his retirement in 1985.[2] Fred Austin, born Fredi Stiller, was awarded the MBE in the New Year’s Honours List for 2006 in recognition of his service to the communities of Dudley.[3] Fred Austin died in March 2019 at the age of 90, four months after the death of his wife Margaret.[4] Ian Austin’s adoptive siblings are David Austin, the chief executive of the British Board of Film Classification, Helen, who is a nutritionist and former teacher, and Rebecca, who is one of Britain’s leading midwives.[4]

Having failed the eleven-plus he was educated at the Dudley School from 1977 to 1983. He studied government and politics at the University of Essex.[1]

Austin was keen to obtain a National Union of Journalists card and took a job with Black Country Publishing in Netherton where his personal interest in sport, especially cycling (he was chair of the All-Party Parliamentary Cycling Group)[5] and football, led him to work as a journalist on Midland Sport Magazine.

Austin was elected as a councillor in the Metropolitan Borough of Dudley in 1991, and served until 1995. He then moved to become press officer for the West Midlands Labour Party until 1998, when he spent a year as deputy director of communications for the Scottish Labour Party.

He was appointed a political advisor to the Chancellor of the Exchequer (later Prime Minister), Gordon Brown, in 1999. He held the position until his election in 2005, and was known as one of Brown’s closest lieutenants.

Austin was selected as the Labour candidate for Dudley North following the retirement of Ross Cranston, and was elected at the 2005 general election with a majority of 5,432.

In June 2007, he was appointed Parliamentary Private Secretary to Gordon Brown, with a special provision to attend cabinet meetings.[6] He was moved to a new position in the 2008 reshuffle, becoming an Assistant Whip for the Government. In the June 2009 reshuffle, he became Parliamentary Under Secretary of State at the Department for Communities and Local Government and Minister for the West Midlands. Under Ed Miliband, Austin served as Shadow Minister for Culture, Media and Sport between 2010 and 2011 and Shadow Minister for Work and Pensions between 2011 and 2013.[7]

In the 2015 Parliament, Austin joined the Education Select Committee, and was appointed as chair of the Labour Party’s education committee.[8]

In 2013, Ian Austin had proposed that the government should share costs with parents in areas of poor educational attainment who wished to send their children to private schools.[9]

In October 2014, and again in December 2016, he called for greater action to limit immigration, and proposed a range of measures to achieve this, including tighter border controls, fingerprinting immigrants, deporting foreign criminals, reducing benefits entitlement, charging foreigners for NHS care, putting immigrants at the bottom of the housing list and measures to discourage the employment of immigrants rather than British citizens.[10][11]

In March 2018, Austin described Russia as “a fascist, homophobic dictatorship” and suggested the England team boycott the 2018 FIFA World Cup.[12]

He is a member of Labour Friends of Israel.[13] Jonathan Goldstein of the Jewish Leadership Council has called him a friend and ally.[14]

Austin was reprimanded by the Speaker of the House of Commons for heckling during Prime Minister’s Questions on 18 October 2006, and he was subsequently described by David Cameron as one of Gordon Brown’s “boot boys”.[15] The following week he was rebuked again by the Speaker for comments made towards the Conservative benches.[16]

On 1 June 2012, he apologised after claiming falsely that a Palestinian human rights group, Friends of Al-Aqsa, had denied the Holocaust happened in an article he wrote on the Labour Uncut website in 2011. He accepted that the material of which he complained had been produced by an unconnected individual.[17]

In June 2014, Deputy Speaker Dawn Primarolo told Austin to apologise after he referred to Conservative MP Tobias Ellwood as an “idiot”.[18]

In July 2016, Austin was reprimanded by the Speaker of the House of Commons for heckling Labour leader Jeremy Corbyn by shouting “sit down and shut up” and “you’re a disgrace”, as Corbyn criticised the 2003 invasion of Iraq in his response to the publication of the Chilcot Inquiry.[19][20]

In July 2018, Austin was put under investigation by the Labour Party for allegedly using abusive language towards the Party Chairman, Ian Lavery.[21] General Secretary Jennie Formby dropped the inquiry in November, although Austin did receive a reprimand from the Chief Whip.[22][23]

In May 2009, The Daily Telegraph reported that Austin had tried to split a claim for stamp duty on buying his second home in London into two payments and tried to claim the cost back over two financial years. This allowed him to claim the majority of the money (21,559, just 75 short of the maximum) under his second-home allowance in the 2005/06 financial year. He then claimed for the remaining 1,344 stamp duty cost in 2006-2007, together with his legal fees. In all, he went on to claim 22,076 (34 short of the maximum) in the next financial year.[24]

Austin denied any wrongdoing, and defended his actions in an interview with local newspaper Dudley News.[25]

In 2013, Austin became one of the first Labour MPs to call for an in/out referendum on the UK’s membership of the EU.[26] He supported the UK remaining in the EU in the 2016 membership referendum, but is opposed to a second referendum.[27]On 15 January 2019, Austin was one of only three Labour MPs to vote for Theresa May’s Brexit deal in the Meaningful vote (along with Kevin Barron and John Mann).[28][29] In the same series of votes, Austin was one of 14 Labour MPs who voted against his colleague Yvette Cooper‘s amendment, which was designed to prevent a no-deal Brexit by extending the article 50 negotiating period.[30]

On 22 February 2019, Austin resigned from the Labour Party over its ‘culture of antisemitism‘[31] and became an independent MP. His resignation was in the same week as The Independent Group had been formed by other former Labour MPs, but Austin did not join, as he disagreed with their desire for another referendum on Brexit.[32] Despite leaving the Labour Party, Austin remained a member of the lobby group Labour Friends of Israel.[33]

On 19 March, MPs passed a motion put forward by Labour to remove Austin, as well as Independent Group MP Mike Gapes, from the seats on the Foreign Affairs Select Committee they held as part of the Labour Party’s allocation. Austin said that Jeremy Corbyn wanted “to boot me off this committee because I stood up against racism”, while Labour said that it was right that the party filled its allocation of seats on the committees.[34]

In July 2019, he was appointed Prime Ministerial Trade Envoy to Israel by Theresa May. It is an unpaid and voluntary cross-party network, which supports UK trade and investment in global markets.[35]

In September 2019, Austin used his speech in the emergency debate proposed by Jeremy Corbyn to criticise him. Labour MPs on the benches around him told him to “go sit somewhere else” in anger at his comments.[36][37] Later in the month he attended the Labour Party conference with a large mobile billboard stating that Corbyn was unfit to lead the party or country.[38] In November 2019, Austin announced he would not stand in the December general election, and advised his constituents to vote for the Conservative Party in order to stop Jeremy Corbyn becoming Prime Minister.[39][40] In December 2019, 10 days before the General Election, Labour supporters and members received a letter from Austin through the Royal Mail. In the letter, Austin urged Labour voters to vote Conservative. The letter claimed the addresses had been obtained from the Register of Electors and was a promotion on behalf of the Conservative and Unionist Party.[41]