Ilan Ramon (born Ilan Wolferman; June 20, 1954 – February 1, 2003) was an Israeli fighter pilot and later the first and only Israeli astronaut.

Ramon was a space shuttle payload specialist of STS-107, the fatal mission of Columbia, in which he and six other crew members were killed in the re-entry accident. At 48, he was the oldest member of the crew. Ramon is the only foreign recipient of the United States Congressional Space Medal of Honor, which he was awarded posthumously.

Ramon was born in Ramat Gan, Israel, to Tonya (1929-2003) and Eliezer Wolferman (1923-2006). He grew up in Beersheba. His father was from Germany, and his family fled Nazi persecution in 1935. His mother and grandmother were from Poland, and were Holocaust survivors, having been in Auschwitz. They emigrated to Israel in 1949. His first name, Ilan, means “tree” in Hebrew. Ilan changed his last name from Wolferman to Ramon, a more “Israeli” name, when he joined the IAF. This was customary and expected of IAF pilots at the time.

Ramon graduated from high school in 1972. In 1987, he graduated with a B.Sc. degree in electronics and computer engineering from Tel Aviv University.

Ilan Ramon was a Colonel (Aluf Mishne) and a fighter pilot in the Israeli Air Force, with thousands of hours of flying experience. In 1974, he graduated as a fighter pilot from the Israel Air Force (IAF) Flight School. From 1974-76 he participated in A-4 Basic Training and Operations. 1976-80 was spent in Mirage III-C training and operations. In 1980, as one of the IAF’s establishment team of the first F-16 Squadron in Israel, he attended the F-16 Training Course at Hill Air Force Base, Utah. From 1981-83, he served as the Deputy Squadron Commander B, F-16 Squadron.

In 1981 he was the youngest pilot taking part in Operation Opera, Israel’s strike against Iraq’s unfinished Osiraq nuclear reactor. The facility was destroyed, killing ten Iraqi soldiers and one French researcher.

After attending the Tel Aviv University, he served as Deputy Squadron Commander A, 119 Squadron, flying the F-4 Phantom (1988-90). During 1990, he attended the Squadron Commanders Course and between 1990 and 1992, commanded 117 Squadron, flying the F-16. From 1992-94, he was Head of the Aircraft Branch in the Operations Requirement Department. In 1994, he was promoted to the rank of Colonel and assigned as Head of the Department of Operational Requirement for Weapon Development and Acquisition. He stayed at this post until 1998.

In 1997, Ramon was selected as a Payload Specialist. He was designated to train as prime for a space shuttle mission with a payload that included a multispectral camera for recording desert aerosol (dust). In July 1998, he reported for training at the Johnson Space Center, Houston, Texas, where he trained until 2003. He flew aboard STS-107, logging 15 days, 22 hours and 20 minutes in space.

Although considered a secular Jew, Ramon reportedly sought to follow Jewish observances while in orbit. In an interview he said, “I feel I am representing all Jews and all Israelis.” He was the first spaceflight participant to request kosher food. He reportedly sought advice from a Chabad Lubavitch rabbi, Zvi Konikov, about how to observe the Jewish Sabbath in space, as the period between sunrises in orbit is approximately 90 minutes. This was referenced by the words “Jerusalem we have a problem” in Rabbi Konikov’s speech at the Kennedy Space Center Memorial for Columbia on February 7, 2003.

The STS-107 mission ended abruptly when Space Shuttle Columbia was destroyed and its crew died during re-entry, 16 minutes before scheduled landing.

Ramon, whose mother and grandmother were survivors of Auschwitz, was asked by S. Isaac Mekel, director of development at the American Society for Yad Vashem, to take an item from Yad Vashem aboard STS-107. Ramon carried with him a pencil sketch, Moon Landscape, drawn by 16-year-old Petr Ginz, who died in Auschwitz. Ramon also took with him a microfiche copy of the Torah given to him by Israeli president Moshe Katsav and a miniature Torah scroll (from the Holocaust) that was given him by Prof. Yehoyachin Yosef, a Bergen Belsen survivor. Ramon asked the 1939 Club, a Holocaust survivor organization in Los Angeles, for a symbol of the Holocaust to take into outer space with him. A barbed wire mezuzah by the San Francisco artist Aimee Golant was selected. Ramon also took with him a dollar of the Lubavitcher Rebbe, Rabbi Menachem M. Schneerson. Ramon and the rest of the Columbia crew died over East Texas in the Southern United States during entry into Earth’s atmosphere, 16 minutes prior to scheduled landing.On November 10, 2013, the American Society for Yad Vashem held a special event with the participation of Petr Ginz’s nephew and Ramon’s son Tal, who performed a song he wrote in memory of his father.

Among the recovered 40% from the contents of the Columbia space shuttle that crashed outside Palestine, Texas were 37 pages of Ramon’s diary, which NASA returned to his wife.

These 37 pages from the diary he was keeping while in orbit survived the crash and were returned to his widow, Rona, who has shared an excerpt with the Israeli public in a display at Jerusalem’s Israel Museum. Rona Ramon brought it to Israel Museum forensic experts. Only two pages were displayed, one containing Ramon’s notes, and the other is a copy of the Kiddush prayer.Curator Yigal Zalmona said the diary was partially restored in one year, and needed four more, for police scientists to decipher 80% of the text. Zalmona stated: “The diary survived extreme heat in the explosion, extreme atmospheric cold, and then “was attacked by microorganisms and insects. It’s almost a miracle that it survived it’s incredible. There is ‘no rational explanation’ for how it was recovered when most of the shuttle was not, he said.” Ramon wrote on the last day of the journal:

Today was the first day that I felt that I am truly living in space. I have become a man who lives and works in space.

Inscribed in black ink and pencil, it covered the first six days of the 16-day mission. The papers remained white even though, exposed at high speed 37 miles (60 km) above the Earth, they should have burned.

Ramon was survived by his wife Rona and their four children (Assaf, Tal, Yiftah, and Noa), who were in Florida at the time of the accident.

His eldest son, Assaf Ramon (February 10, 1988 – September 13, 2009), died aged 21 during a routine training flight while piloting his F-16A, 3 months after graduating from the IAF flight school Hatzerim Airbase as the top cadet in his class.He lost consciousness during a spell of vertigo, as a result of the high speed and G-force conditions he was subjected to. This led to the plane crash and Ramon’s subsequent death. Assaf was considered an excellent pilot. A lieutenant of the Israeli Air Force, he was posthumously promoted to the rank of captain.

Ilan Ramon’s widow, Rona Ramon, served in the Israel Defense Forces as a paramedic, later earning a BA at the Wingate Institute. After Asaf’s death, Rona returned to school and earned a master’s degree in holistic health at Massachusetts’ Lesley University. She also began to lecture about dealing with grief and finding coping mechanisms. She served as founding CEO of the nonprofit Ramon Foundation for youth academic excellence and social leadership through science and technology. Rona died on December 17, 2018, after battling pancreatic cancer. In an attempt to spare her children from having to attend the funeral of another family member, Rona left instructions that no funeral be held for her, and that her body be cremated. 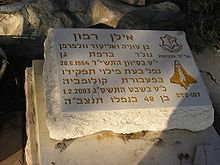 All namesakes are in Israel unless specified otherwise: