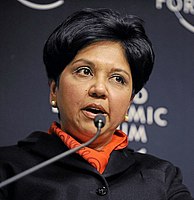 She serves on the board of Amazon,[10] the International Cricket Council,[11] and Schlumberger.[12]

Nooyi received a bachelor’s degrees in Physics, Chemistry and Mathematics from Madras Christian College of the University of Madras in 1974 and a Post Graduate Programme Diploma from Indian Institute of Management Calcutta in 1976.[17]

In 1978, Nooyi was admitted to Yale School of Management and moved to the USA where she earned a master’s degree in Public and Private Management in 1980.[18]

Beginning her career in India, Nooyi held product manager positions at Johnson & Johnson and textile firm Mettur Beardsell. While attending Yale School of Management, Nooyi completed her summer internship with Booz Allen Hamilton.[18] In 1980, Nooyi joined the Boston Consulting Group (BCG) as a strategy consultant, [19] and then worked at Motorola as Vice President and Director of Corporate Strategy and Planning,[19] followed by a stint at Asea Brown Boveri.[20]

Nooyi joined PepsiCo in 1994 and was named CEO in 2006[21], replacing Steven Reinemund, becoming the fifth CEO in PepsiCo’s 44-year history.[22]. Nooyi has directed the company’s global strategy for more than a decade and led PepsiCo’s restructuring, including the 1997 divestiture of Tricon, now known as Yum! Brands. Tricon included companies like Pizza Hut, KFC, and Taco Bell under its umbrella [23]. The financial gains from this spinoff allowed the company to increase the pace of its share buyback strategy, thereby giving it more leverage to pursue future acquisitions without as much shareholder backlash [24]. Nooyi also took the lead in the acquisition of Tropicana in 1998,[25] and the merger with Quaker Oats Company, which also brought Gatorade in 2001,[26] The $3.3 billion acquisition of Tropicana initially faced opposition from other PepsiCo executives and Wall Street critics.[citation needed] Acquiring Tropicana allowed PepsiCo to gain a competitive edge; Tropicana at the time captured 44% of the chilled orange juice segment, the fastest growing segment of the juice market, an especially positive metric when compared to Coca-Cola’s Minute Maid which captured less than half of Tropicana’s market share.[citation needed] The Quaker Oats Company‘s ownership of Gatorade was a positive strategic move for PepsiCo, since Gatorade was responsible for 80% of sports drink sales at the time.[27] Similar to the Tropicana acquisition, this strategic move gave PepsiCo leverage against Coca-Cola, owner of Powerade – second in the sports drink segment.[citation needed]PepsiCo‘s annual net profit rose from $2.7 billion to $6.5 billion.[28][29]

Nooyi’s strategic redirection of PepsiCo has been largely successful.[36] She reclassified PepsiCo’s products into three categories: “fun for you” (such as potato chips and regular soda), “better for you” (diet or low-fat versions of snacks and sodas), and “good for you” (items such as oatmeal). Her initiative was backed up with ample funding. She moved corporate spending away from junk foods and into the healthier alternatives, with the aim of improving the healthiness of even the “fun” offerings.[29][37] In 2015, Nooyi removed aspartame from Diet Pepsi, furthering the shift towards healthier foods, despite lack of evidence of aspartame’s harmful effects.[35]

Nooyi has stated an intent to develop a line of snacks marketed specifically for women, feeling that it is a hitherto unexplored category. In a radio interview, Nooyi stated that PepsiCo is getting ready to launch products designed and packaged according to women’s preferences, and based on behavioral differences in the way men and women consume snacks.[38]

On 6 August 2018, PepsiCo Inc confirmed that Nooyi would step down as the CEO and Ramon Laguarta, a 22-year veteran of PepsiCo, would replace her on 3 October. Ramon Laguarta replaced her on that day, as well as becoming a member of the board of directors. However, Nooyi continued to serve as the chairwoman of the company until early 2019.[39] During her tenure, the company’s sales grew 80%. Nooyi served as CEO for 12 years, 7 years longer than the average CEO tenure at large companies according to an Equilar study.[40]

In 2019 Nooyi became the co-director of the newly created Connecticut Economic Resource Center, a public-private partnership with the Connecticut Department of Economic and Community Development.[41] She will help draft the states new economic development strategy. Nooyi is a resident of Connecticut and a college classmate of Connecticut Governor Ned Lamont.[42]

In January 2008, Nooyi was elected chairwoman of the U.S.-India Business Council (USIBC). Nooyi leads USIBC’s Board of Directors, an assembly of more than 60 senior executives representing a cross-section of American industry.[53][54]

Nooyi has been named 2009 CEO of the Year by Global Supply Chain Leaders Group.[55]

In 2009, Nooyi was considered one of “The TopGun CEOs” by Brendan Wood International, an advisory agency.[56][57] After five years on top, PepsiCo’s Indian American chairman and CEO Indra Nooyi has been pushed to the second spot as most powerful woman in US business by Kraft’s CEO, Irene Rosenfeld.[58]

In 2013, Nooyi was named one of the “25 Greatest Global Living Legends” by NDTV. On 14 December 2013 she was awarded by the President of India Pranab Mukherjee at the Rashtrapati Bhavan.

Nooyi was named to Institutional Investor‘s Best CEOs list in the All-America Executive Team Survey in 2008 to 2011.[59]

The Yale School of Management will name its deanship in honour of Nooyi as she gifted an undisclosed amount, becoming the school’s biggest alumni donor and the first woman to endow a deanship at a top business school.[60]

Nooyi is a Successor Fellow of the Yale Corporation.[73] She serves as a member of the Foundation Board of the World Economic Forum, International Rescue Committee, Catalyst[74] and the Lincoln Center for the Performing Arts. She is also a member of the Board of Trustees of Eisenhower Fellowships, and has served as Chairperson of the U.S.-India Business Council.

In December 2016, Nooyi joined a business forum assembled by Donald Trump to provide strategic and policy advice on economic issues.[75]

Indra married Raj K. Nooyi, president at AmSoft Systems, in 1981.[76] Nooyi has two daughters and resides in Greenwich, Connecticut. One of her daughters is currently attending the School of Management at Yale, Nooyi’s alma mater.[77] Forbes ranked her at the 3rd spot among “World’s Powerful Moms” list.[78]

In India, she used to play cricket and was also in an all-girl rock band, where she played guitar.[80]