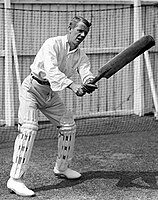 Hallows was a left-handed middle-order batsman and a left-arm bowler who converted early in his career from fast-medium to medium pace. He played a few games for Lancashire from 1898, but played regularly in 1901 with 1,170 runs at an average of more than 31 runs per innings. He was less successful in the two following seasons, but in 1904, a season in which Lancashire were expected to struggle following the departure of Sydney Barnes, Hallows achieved the all-rounders “double” of 1,000 runs and 100 wickets. Lancashire won the County Championship and Hallows was named as one of the Wisden Cricketers of the Year in the 1905 edition of the almanack.

In the 1905 season, though his batting remained useful, his bowling fell away and he played only a handful of matches for the county in 1906 and 1907 as his health grew worse: he had epilepsy.

Hallows was the uncle of Charlie Hallows, the Lancashire and England opening batsman of the 1920s.