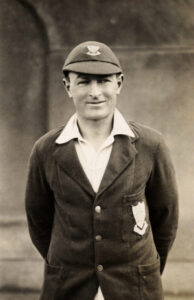 James Horace Parks (12 May 1903 in Haywards Heath , Sussex – 21 November 1980 in Cuckfield, Sussex) was a cricketer who played for Sussex and England.

He is referred to as Jim Parks senior, because his son, James Michael Parks, was also a successful Sussex, Somerset and England cricketer. In addition, his brother Harry played for Sussex and his grandson Bobby played for Hampshire.

Parks was a right-handed opening batsman and a medium-pace bowler of inswingers. He was a regular member of the Sussex county team from 1927 and scored 1,000 runs in every season except one up to 1939, when his first-class career ended with the Second World War. In 1935, he did the all-rounder’s “double” of 1,000 runs and 100 wickets, but nothing in Parks’ career suggested he was an out-of-the-ordinary county cricketer — until 1937.

In that year, by scoring 3,003 runs and taking 101 wickets in the season, he set a record that is all but certainly never to be equalled. Only 13 cricketers have scored more than 2,000 runs and taken 100 wickets in an English season; no other cricketer has ever taken 100 wickets while scoring 3,000 runs. His run total included 11 centuries and he also took 21 catches. Having earlier in his career been termed “solid”, Parks revealed in 1937 a full range of previously unsuspected strokes and was praised by Wisden for his “enterprise”.

Parks was called up for the 1937 Test match against New Zealand at Lord’s alongside another debutant, Leonard Hutton. He scored 22 and 7 and took three wickets, but was never chosen again. Unsurprisingly, he was a Wisden Cricketer of the Year in 1938.

After World War II, Parks played Lancashire League cricket and he was coach at Sussex for a period in the 1960s.