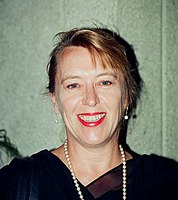 Williams served as the founding coordinator of the International Campaign to Ban Landmines (ICBL) from early 1992 until February 1998. Prior to that work, she spent eleven years on various projects related to the wars in Nicaragua and El Salvador, where, according to the Encyclopedia of Human Rights, she “spent the 1980s performing life-threatening human rights work.”

From its small beginning and official launch in 1992, Williams and the ICBL dramatically achieved the campaign’s goal of an international treaty banning antipersonnel landmines during a diplomatic conference held in Oslo in September 1997. The Ottawa Treaty that banned land-mines is credited to her and the ICBL. Three weeks later, she and the ICBL were awarded the Nobel Peace Prize. At that time, she became the tenth woman – and third American woman – in its almost hundred-year history to receive the Prize.

In November 2004, after discussions with Iranian Peace Laureates Dr. Shirin Ebadi and Professor Wangari Maathai of Kenya, Williams established the Nobel Womens Initiative which was launched in January 2006. Williams has since served as its Chair. This initiative brought together six of the female Peace Laureates, the women seek to use their influence to promote the work of women working for peace with justice and equality. (Aung San Suu Kyi is an honorary member.)

Williams is quoted as saying, “The image of peace with a dove flying over a rainbow and people holding hands singing kumbaya ends up infantilizing people who believe that sustainable peace is possible. If you think that singing and looking at a rainbow will suddenly make peace appear then you’re not capable of meaningful thought, or understanding the difficulties of the world.”