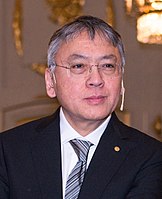 Kazuo Ishiguro OBE FRSA FRSL (born 8 November 1954) is a Nobel Prize-winning British novelist, screenwriter, and short-story writer. He was born in Nagasaki, Japan; his family moved to England in 1960 when he was five. Ishiguro graduated from the University of Kent with a bachelor’s degree in English and Philosophy in 1978 and gained his master’s from the University of East Anglia‘s creative writing course in 1980.

Ishiguro is considered one of the most celebrated contemporary fiction authors in the English-speaking world, having received four Man Booker Prize nominations, and having won the award in 1989, for his novel The Remains of the Day. Ishiguro’s 2005 novel, Never Let Me Go, was named by Time as the best novel of the year, and was included in the magazine’s list of the 100 best English-language novels published between 1923 and 2005. Growing up in a Japanese family in the UK was crucial to his writing, as it enabled him, he says, to see things from a different perspective to that of many of his British peers. His seventh novel, The Buried Giant, was published in 2015.

In 2017, the Swedish Academy awarded Ishiguro the Nobel Prize in Literature, describing him in its citation as a writer “who, in novels of great emotional force, has uncovered the abyss beneath our illusory sense of connection with the world”.

Ishiguro was born in Nagasaki, Japan on 8 November 1954, the son of Shizuo Ishiguro, a physical oceanographer, and his wife Shizuko. His name in Japanese is written as . At the age of five, Ishiguro and his family (including his two sisters) left Japan and moved to Guildford, Surrey, as his father was invited for research at the National Institute of Oceanography. He did not return to visit Japan until 1989, nearly 30 years later, as a participant in the Japan Foundation Short-Term visitors Program. In an interview with Kenzabur e, Ishiguro stated that the Japanese settings of his first two novels were imaginary: “I grew up with a very strong image in my head of this other country, a very important other country to which I had a strong emotional tie In England I was all the time building up this picture in my head, an imaginary Japan.”

He attended Stoughton Primary School and then Woking County Grammar School in Surrey. After finishing school, he took a gap year and travelled through the United States and Canada, while writing a journal and sending demo tapes to record companies. In 1974, he began studies at the University of Kent at Canterbury, graduating in 1978 with a Bachelor of Arts (honours) in English and Philosophy. After spending a year writing fiction, he resumed his studies at the University of East Anglia where he studied with Malcolm Bradbury and Angela Carter, and gained a Master of Arts in Creative Writing in 1980. His thesis became his first novel, A Pale View of Hills, published in 1982. He became a British citizen in 1983.

Ishiguro set his first two novels in Japan; however, in several interviews, he clarified that he has little familiarity with Japanese writing and that his works bear little resemblance to Japanese fiction. In an interview in 1989, when discussing his Japanese heritage and its influence on his upbringing, the author has stated, “I’m not entirely like English people because I’ve been brought up by Japanese parents in a Japanese-speaking home. My parents didn’t realize that we were going to stay in this country for so long, they felt responsible for keeping me in touch with Japanese values. I do have a distinct background. I think differently, my perspectives are slightly different.” When asked about his identity, the author says,

People are not two-thirds one thing and the remainder something else. Temperament, personality, or outlook don’t divide quite like that. The bits don’t separate clearly. You end up a funny homogeneous mixture. This is something that will become more common in the latter part of the centurypeople with mixed cultural backgrounds, and mixed racial backgrounds. That’s the way the world is going.

In a 1990 interview, he said, “If I wrote under a pseudonym and got somebody else to pose for my jacket photographs, I’m sure nobody would think of saying, ‘This guy reminds me of that Japanese writer.'” Although some Japanese writers have had a distant influence on his writingJun’ichir Tanizaki is the one he most frequently citesIshiguro has said that Japanese films, especially those of Yasujir Ozu and Mikio Naruse, have been a more significant influence. A number of his novels are set in the past. Never Let Me Go has science fiction qualities and a futuristic tone; however, it is set in the 1980s and 1990s, and thus takes place in a very similar parallel world. His fourth novel, The Unconsoled, takes place in an unnamed Central European city. The Remains of the Day is set in the large country house of an English lord in the period surrounding World War II.

An Artist of the Floating World is set in an unnamed Japanese city during the period of reconstruction following Japan’s surrender in 1945. The narrator is forced to come to terms with his part in World War II. He finds himself blamed by the new generation who accuse him of being part of Japan’s misguided foreign policy and is forced to confront the ideals of the modern times as represented by his grandson. Ishiguro said of his choice of time period, “I tend to be attracted to pre-war and postwar settings because I’m interested in this business of values and ideals being tested, and people having to face up to the notion that their ideals weren’t quite what they thought they were before the test came.”

With the exception of The Buried Giant, Ishiguro’s novels are written in the first-person narrative style and the narrators often exhibit human failings. The author’s technique is to allow these characters to reveal their flaws implicitly during the narrative; he thus creates a sense of pathos by allowing the reader to see the narrator’s flaws while being drawn to sympathise with the narrator as well. This pathos is often derived from the narrator’s actions, or, more often, inaction. In The Remains of the Day, the butler Stevens fails to act on his romantic feelings towards housekeeper Miss Kenton because he cannot reconcile his sense of service with his personal life.

Ishiguro’s novels often end without resolution. The issues his characters confront are buried in the past and remain unresolved. Thus Ishiguro ends many of his novels on a note of melancholic resignation. His characters accept their past and who they have become, typically discovering that this realisation brings comfort and an ending to mental anguish. This can be seen as a literary reflection on the Japanese idea of mono no aware. Ishiguro counts Dostoyevsky and Proust amongst his influences. His works have also been compared to Salman Rushdie, Jane Austen, and Henry James, though Ishiguro himself rejects these comparisons.

In 2017, Ishiguro was awarded the Nobel Prize in Literature, because “in novels of great emotional force, has uncovered the abyss beneath our illusory sense of connection with the world”. In response to receiving the award, Ishiguro stated:

It’s a magnificent honour, mainly because it means that I’m in the footsteps of the greatest authors that have lived, so that’s a terrific commendation. The world is in a very uncertain moment and I would hope all the Nobel Prizes would be a force for something positive in the world as it is at the moment. I’ll be deeply moved if I could in some way be part of some sort of climate this year in contributing to some sort of positive atmosphere at a very uncertain time.

In an interview after the announcement of the Nobel Prize, he said “I’ve always said throughout my career that although I’ve grown up in this country and I’m educated in this country, that a large part of my way of looking at the world, my artistic approach, is Japanese, because I was brought up by Japanese parents, speaking in Japanese” and “I have always looked at the world through my parents’ eyes.”

Ishiguro has co-written several songs for the jazz singer Stacey Kent, with saxophonist Jim Tomlinson, Kent’s husband. Ishiguro has contributed lyrics to Kent’s 2007 Grammy-nominated album Breakfast on the Morning Tram, including its title track, her 2011 album, Dreamer in Concert, her 2013 album The Changing Lights, and her 2017 album, I Know I Dream. Ishiguro also wrote the liner notes to Kent’s 2003 album, In Love Again. Ishiguro first met Kent after he chose her recording of “They Can’t Take That Away from Me” as one of his Desert Island Discs in 2002 and Kent subsequently asked him to write for her. Ishiguro has said of his lyric writing that “with an intimate, confiding, first-person song, the meaning must not be self-sufficient on the page. It has to be oblique, sometimes you have to read between the lines” and that this realisation has had an “enormous influence” on his fiction writing.

Ishiguro has been married to Lorna MacDougall, a social worker, since 1986. They met at the West London Cyrenians homelessness charity in Notting Hill, where Ishiguro was working as a residential resettlement worker. The couple live in London with their daughter Naomi.

Ishiguro wrote in an opinion piece “that the UK is now very likely to cease to exist” as a result of the 2016 United Kingdom European Union membership referendum.

He describes himself as a “serious cinephile” and “great admirer of Bob Dylan“, a previous recipient of the Nobel Literature prize.

Except for A Pale View of Hills and The Buried Giant, all of Ishiguro’s novels and his short story collection have been shortlisted for major awards. Most significantly, An Artist of the Floating World, When We Were Orphans, and Never Let Me Go were all short-listed for the Booker Prize. A leaked account of a judging committee’s meeting revealed that the committee found itself deciding between Never Let Me Go and John Banville’s The Sea before awarding the prize to the latter.