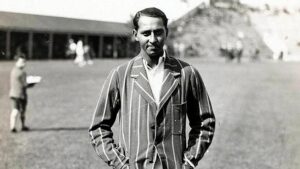 Duleepsinhji usually referred to as Kumar Shri Duleepsinhji or K. S. Duleepsinhji (13 June 1905 – 5 December 1959) was a cricketer who played for England. He was educated at the Rajkumar College, Rajkot, India and Cheltenham College, Gloucestershire, England.

Descended from the Jam Sahibs of Nawanagar State, Duleepsinhji was born on the Kathiawar peninsula in present-day Gujarat. His brothers included Himmatsinhji, the first Lieutenant-Governor of Himachal Pradesh, and Digvijaysinhji, who succeeded the brothers’ uncle, Ranjitsinhji, as ruler of Nawanagar. Ranjitsinhji, after whom the Ranji Trophy is named, also played cricket for England. While he was still playing school cricket, the future President of the MCC, HS Altham, wrote of him in Wisden: “In natural gifts of eye, wrist and footwork he is certainly blest far above the ordinary measure… there is no doubt about the judgment and certainty with which he takes toll of straight balls of anything but the most immaculate length. His late cutting is quite beautiful and there is a certain ease and maturity about all his batting methods that stamps him as of a different class from the ordinary school batsman.” Duleepsinhji went on to achieve great success as a batsman for Cheltenham College, Cambridge University, Sussex and eventually England in a career cut short by recurrent illness. His Test average of 58.5 ranks him among the best batsmen to have played Test cricket. In 1930, playing for Sussex, he scored 333 runs in one day against Northamptonshire. The photo shows one of Duleepsinhji’s routine visits to a village near Junagadh in Saurashtra State to see the condition of living of the local people. He is being given the traditional welcome by the villagers by drum beating and pipe music.

Following his playing career, and based on his experience as High Commissioner of India in Australia and New Zealand, Duleepsinhji was made Chairman of the Public Service Commission in the State of Saurashtra after his return to India. As Maharaja of Navanagar (Jamnagar) he took lot of interest in the well being of his subjects and the State governing.

Duleepsinhji also visited the first and the only public utility thermal power station in the State, at that time located at Shapur Sorath, near a village Vanthly (near Junagadh). As this power station was using crushed coal as fuel for boilers and chlorination for the cooling water system, which normally polluted the local atmosphere; he wanted to see personally the working conditions and the amenities provided for the villagers housing and the recreation facilities.

Duleepsinhji died on 5 December 1959, following a heart attack, in Bombay.  The Duleep Trophy is named in his honour.