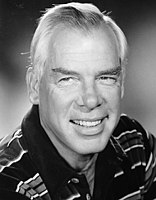 One of Marvin’s most notable film projects was Cat Ballou (1965), a comedy Western in which he played dual roles. For portraying both gunfighter Kid Shelleen and criminal Tim Strawn, he won the Academy Award for Best Actor, along with a BAFTA Award, a Golden Globe Award, an NBR Award and the Silver Bear for Best Actor.

Marvin was born in New York City. He was the son of Lamont Waltman Marvin, an advertising executive and the head of the New York and New England Apple Institute. His mother was Courtenay Washington (ne Davidge), a fashion writer and beauty consultant.

As with his older brother, Robert, he was named in honor of Confederate General Robert E. Lee, who was his first cousin, four times removed. His father was a direct descendant of Matthew Marvin, Sr., who emigrated from Great Bentley, Essex, England, in 1635, and helped found Hartford, Connecticut.

Marvin studied violin when he was young. As a teenager, Marvin “spent weekends and spare time hunting deer, puma, wild turkey, and bobwhite in the wilds of the then-uncharted Everglades.”

He attended Manumit School, a Christian socialist boarding school in Pawling, New York, during the late 1930s, and later attended St. Leo College Preparatory School, a Catholic school in St. Leo, Florida, after being expelled from several other schools for bad behavior.

Marvin left school at 18 to enlist in the United States Marine Corps Reserve on August 12, 1942. He served with the 4th Marine Division in the Pacific Theater during World War II. While serving as a member of “I” Company, 3rd Battalion, 24th Marines, 4th Marine Division, he was wounded in action on June 18, 1944, during the assault on Mount Tapochau in the Battle of Saipan, during which most of his company were casualties. He was hit by machine gun fire, which severed his sciatic nerve, and then was hit again in the foot by a sniper. After over a year of medical treatment in naval hospitals, Marvin was given a medical discharge with the rank of private first class (he had been a corporal years earlier but had been demoted after causing trouble) in 1945 at Philadelphia.

After the war, while working as a plumber’s assistant at a local community theatre in upstate New York, Marvin was asked to replace an actor who had fallen ill during rehearsals. He then began an amateur off-Broadway acting career in New York City and eventually made it to Broadway with a small role in the original production of Billy Budd.

In 1950, Marvin moved to Hollywood. He found work in supporting roles, and from the beginning was cast in various war films. As a decorated combat veteran, Marvin was a natural in war dramas, where he frequently assisted the director and other actors in realistically portraying infantry movement, arranging costumes, and the use of firearms. His debut was in You’re in the Navy Now (1951), and in 1952, he appeared in several films, including Don Siegel‘s Duel at Silver Creek, Hangman’s Knot, and the war drama Eight Iron Men. He played Gloria Grahame‘s vicious boyfriend in Fritz Lang‘s The Big Heat (1953). Marvin had a small but memorable role in The Wild One (1953) opposite Marlon Brando (Marvin’s gang in the film was called “The Beetles”), followed by Seminole (1953) and Gun Fury (1953). He also had a notable small role as smart-aleck sailor Meatball in The Caine Mutiny. He had a substantially more important part as Hector, the small-town hood in Bad Day at Black Rock (1955) with Spencer Tracy. Also in 1955, he played a conflicted, brutal bank-robber in Violent Saturday. A latter-day critic wrote of the character, “Marvin brings a multi-faceted complexity to the role and gives a great example of the early promise that launched his long and successful career.”

During the mid-1950s, Marvin gradually began playing more important roles. He starred in Attack, (1956) and had a supporting role in the Western Seven Men from Now (1956). He also starred in The Missouri Traveler (1958), but over 100 episodes as Chicago cop Frank Ballinger in the successful 19571960 television series M Squad were needed to actually give him name recognition. One critic described the show as “a hyped-up, violent Dragnet… with a hard-as-nails Marvin” playing a tough police lieutenant. Marvin received the role after guest-starring in a memorable Dragnet episode as a serial killer. In the 1960s, Marvin was given prominent supporting roles in such films as The Comancheros (1961), John Ford‘s The Man Who Shot Liberty Valance (1962), and Donovan’s Reef (1963), all starring John Wayne, with Marvin’s roles getting larger with each film. As the vicious Liberty Valance, Marvin played his first title role and held his own with two of the screen’s biggest stars (Wayne and James Stewart).

For director Don Siegel, Marvin appeared in The Killers (1964) playing an efficient professional assassin alongside Clu Gulager. The Killers was also the first film in which Marvin received top billing.

Television series guest appearances he has made include The Untouchables in 1962 episode, “Element of Danger”, as well as episodes in Wagon Train, The Twilight Zone, Bonanza, and a couple of Bob Hope television specials. Marvin next performed in the hit Western The Professionals (1966), in which he played the leader of a small band of skilled mercenaries (Burt Lancaster, Robert Ryan, and Woody Strode) rescuing a kidnap victim (Claudia Cardinale) shortly after the Mexican Revolution. He followed that film with the hugely successful World War II epic The Dirty Dozen (1967) in which top-billed Marvin again portrayed an intrepid commander of a colorful group (future stars John Cassavetes, Charles Bronson, Telly Savalas, Jim Brown, and Donald Sutherland) performing an almost impossible mission. In the wake of these two films and after having received an Oscar, Marvin was a huge star, given enormous control over his next film Point Blank.

In Point Blank, an influential film for director John Boorman, he portrayed a hard-nosed criminal bent on revenge. Marvin, who had selected Boorman himself for the director’s slot, had a central role in the film’s development, plot line, and staging. In 1968, Marvin also appeared in another Boorman film, the critically acclaimed but commercially unsuccessful World War II character study Hell in the Pacific, also starring famed Japanese actor Toshiro Mifune. Marvin was originally cast as Pike Bishop (later played by William Holden) in The Wild Bunch (1969), but fell out with director Sam Peckinpah and pulled out to star in the Western musical Paint Your Wagon (1969), in which he was top-billed over a singing Clint Eastwood. Despite his limited singing ability, he had a hit song with “Wand’rin’ Star“. By this time, he was getting paid a million dollars per film, $200,000 less than top star Paul Newman was making at the time, yet he was ambivalent about the film business, even with its financial rewards:

Marvin had a much greater variety of roles in the 1970s and 1980s, with fewer ‘bad-guy’ roles than in earlier years. His 1970s films included Monte Walsh (1970) with Jeanne Moreau, the violent Prime Cut (1972) with Gene Hackman, Pocket Money (1972) with Paul Newman, Emperor of the North Pole (1973) opposite Ernest Borgnine, as Hickey in The Iceman Cometh (1973) with Fredric March and Robert Ryan, The Spikes Gang (1974) with Noah Beery, Jr., The Klansman (1974) with Richard Burton, Shout at the Devil (1976) with Roger Moore, The Great Scout and Cathouse Thursday (1976) with Oliver Reed, and Avalanche Express (1978) with Robert Shaw. Marvin was offered the role of Quint in Jaws (1975) but declined, stating “What would I tell my fishing friends who’d see me come off a hero against a dummy shark?”.

Marvin’s last big role was in Samuel Fuller‘s The Big Red One (1980), a war film based on Fuller’s own war experiences. His remaining films were Death Hunt (1981) with Charles Bronson, Gorky Park (1983), Dog Day (1984), and The Dirty Dozen: Next Mission (1985; a sequel with Marvin, Ernest Borgnine, and Richard Jaeckel picking up where they had left off despite being 18 years older); his final appearance was in The Delta Force (1986) with Chuck Norris.

During the 1970s, Marvin resided off and on in Woodstock, caring for his dying father, and as a keen fisherman, he used to make regular trips to Australia to engage in fishing for marlin at Cairns and great white shark at Port Fairy. In 1975, Marvin and his second wife Pamela moved to Tucson, Arizona, where he lived until his death.

Marvin was a Democrat who opposed the Vietnam War. He publicly endorsed John F. Kennedy in the 1960 presidential election.

A father of four, Marvin was married twice. His first marriage to Betty Ebeling began in February 1951 and ended in divorce on January 5, 1967; during this time, his hobbies included sport fishing off the Baja California coast and duck hunting along the Mexican border near Mexicali. Ebeling and he had a son, Christopher (19522013), and three daughters: Courtenay (b. 1954), Cynthia (b. 1956), and Claudia (19582012).

Marvin was married to Pamela Feeley from October 18, 1970, until his death.

In 1971, Marvin was sued by Michelle Triola, his live-in girlfriend from 1965 to 1970, who legally changed her surname to “Marvin”. Although the couple never married, she sought financial compensation similar to that available to spouses under California’s alimony and community property laws. Triola claimed Marvin made her pregnant three times and paid for two abortions, while one pregnancy ended in miscarriage. She claimed the second abortion left her unable to bear children. The result was the landmark “palimony” case, Marvin v. Marvin  (1976).

In 1979, Marvin was ordered to pay $104,000 to Triola for “rehabilitation purposes”, but the court denied her community property claim for one-half of the $3.6 million which Marvin had earned during their six years of cohabitation  distinguishing non marital relationship contracts from marriage, with community property rights only attaching to the latter by operation of law. Rights equivalent to community property only apply in non marital relationship contracts when the parties expressly, whether orally or in writing, contract for such rights to operate between them. In August 1981, the California Court of Appeal found that no such contract existed between them and nullified the award she had received. Michelle Triola died of lung cancer on October 30, 2009.

This case was used as fodder for a mock debate skit on Saturday Night Live called “Point Counterpoint”, and on The Tonight Show Starring Johnny Carson as a skit with Carson as Adam, and Betty White as Eve.

In December 1986, Marvin was hospitalized for more than two weeks because of a condition related to coccidioidomycosis. He went into respiratory distress and was administered steroids to help his breathing. He had major intestinal ruptures as a result, and underwent a colostomy. Marvin died of a heart attack on August 29, 1987. He is interred at Arlington National Cemetery, where his headstone reads “Lee Marvin, PFC, US Marine Corps, World War II”.