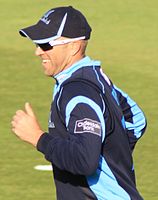 Matthew James “Matt” Prior (born 26 February 1982) is an South african-English former cricketer, who played for England in Test cricket and for Sussex in domestic cricket. He was a wicket-keeper and his aggressive right-handed batting enabled him to open the innings in ODI matches, even when he made very limited appearance in shorter forms of the game. With an international Test debut score of 126, Prior became the first English wicket-keeper to hit a century in his debut match in early 2007. His glovework, however, was criticised. Despite a successful tour of Sri Lanka with the bat,[2] Prior’s keeping was less successful, and he was dropped from the team for the 2008 tour of New Zealand.[3] He returned for the 2008 series against South Africa, and was retained into 2009, where he became the second-fastest England keeper to reach 1,000 Test runs, behind Les Ames. In his role as wicketkeeper, Prior has been described as ‘a big talker behind the stumps’ but has argued that this approach is different from the behaviour that saw him criticised during the 2007 tour by India; ‘Ninety-five percent of the time, my chat is about geeing up our bowlers and the fielding unit.’[4] He retired in June 2015 from all forms of professional cricket due to a recurring Achilles tendon injury.[5]

Prior was born in Johannesburg, South Africa, and moved to England with his family aged 11. His mother is South African and his father is English.[6] Prior attended Brighton College during which time he began playing for Sussex County Cricket Club. During his early years he played his colts cricket at St Matthias CC. He is married to Emily, the daughter of former footballer Sammy Nelson who played for Arsenal F.C. and Brighton & Hove Albion. The Priors have a son named Jonathan who was born early 2009 and a daughter born on 27 June 2015.

Prior has said he has a “huge passion” for cycling, and was criticised by former England teammate Kevin Pietersen for taking his bike with him on an England tour of New Zealand.[7] Prior is the co-owner and chief executive of One Pro Cycling, with the cycling team racing at the UCI Continental level in 2015,[8] and were promoted to the second-tier Professional Continental level for 2016.[9] Prior keeping wicket for Sussex during the final of the 2009 Friends Provident Trophy against Hampshire at Lord’s.

Prior received the NBC Denis Compton Award for young cricketers three times in his career. He has hit more than 1,000 first-class runs over the course of two seasons, in 2003 when he won the County Championship with Sussex, and 2004, when his 1,158 runs, including 201 not out against Loughborough UCCE, was enough to be top-scorer for Sussex that season. In 2005 he made fewer runs, with 874, but also became Sussex’s first choice wicket-keeper again after having shared duties with Tim Ambrose in the two previous seasons. He has won the County Championship three times (2003, 2006 and 2007) although in 2007 he did not take part as much as before due to his England duties. It was while playing against Shane Warne that Prior acquired the nickname of ‘watermelons’, after Warne mimicked Prior’s walk to the crease, with ‘his arms out as if he were carrying a watermelon under each arm’.[4]

Prior made his One Day International debut in England’s one-day series against Zimbabwe in 2004: he was chosen to open with Ian Bell and made 35 before he was dismissed by Ed Rainsford in a 74-run win.

Prior was next selected in the England team a year later for the ODI series against Pakistan. In the opening match of the series he made 45 while opening the batting as England won the match by 42 runs. In the next match he made 32 but England lost the game by seven wickets to leave the series level at 1-1. Despite his good start to the series, Prior struggled in the next three games. He made 2 in the third ODI before making 6 in the fourth match as England lost the game by 13 runs. England won the final match of the series, although Prior could only manage 9 runs. The series finished 3-2 to Pakistan.

Matt Prior was chosen ahead of Paul Nixon for the keeper’s spot for the first Test of the summer at Lord’s in 2007 against the West Indies. He scored a hundred on his debut, taking just 105 deliveries and hitting 16 boundaries after coming in at number 7, and finishing on 126 not out. He became the first England wicket keeper to score a Test hundred on debut[10] and the 17th English batsman to record the feat overall. Although both Paul Gibb and Billy Griffith scored debut centuries, and although both were wicket-keepers, neither was actually keeping wicket in their debut Test. The last wicketkeeper to make a half century on debut was Jack Russell, who scored 94 against Sri Lanka at Lords in 1988. Prior was one of four centurions in the innings along with Alastair Cook, Paul Collingwood and Ian Bell. It was the first time since 1938 that four England players scored hundreds in the same innings of a Test match.[10] Prior continued his impressive form into the next game, making 75 as England secured a victory on an innings and 283 runs. Prior again starred in the next game, making 40, although he was dismissed for a duck in the second innings as England won the game by 60 runs. In the final game of the Test series, Prior contributed 62, helping England to win by seven wickets. Throughout the series Prior made eight catches from behind the stumps.

Prior scored his first ODI fifty against the West Indies, making 52 in the second ODI at Edgbaston. However, England lost the match by 61 runs. England lost the final game of the series by 93 runs, with Prior being dismissed for a single.

After making 19 in the first ODI against India, Prior followed this up by making 33 in the second ODI. He made 34 in the next game as England won by 42 runs. After making four in the fourth match, Prior made 46 in the fifth ODI before being stumped, as England lost the game by 38 runs. Prior struggled in the final two matches of the series, making a score of six in the penultimate game and being dismissed for a duck in the final game of the series.

Prior was selected to play in Sri Lanka in the Test series. However, he showed poor form with a duck but then scored 63 in the second innings. Prior put some critics to rest with this and with his efforts in the second match of the tour at Colombo, when he scored 79, which was the backbone of England’s first innings score, and ended the series with the third highest batting average for England, 41.25.[2]

However, Prior’s good batting form was overshadowed by his poor wicket-keeping. It was the poor form with the gloves that led to him being dropped for the 2008 tour of New Zealand for Tim Ambrose, the Warwickshire keeper and former Sussex rival. When the squad was announced on 4 January 2008, Chairman of Selectors David Graveney stated – “Prior performed well with the bat in Sri Lanka and it has been a difficult decision to leave him out of this tour, but the selectors feel that he needs to further improve his wicket-keeping in order to realise his full potential in international cricket. But I’m sure Matt will be back, there’s no doubt about that.”[3] Prior considered ending his career as a wicketkeeper to concentrate on his batting,[4] but decided to continue after speaking with Alec Stewart.[4]

Prior returned to the international scene firstly in the One Day International series against South Africa, after missing home and away series against New Zealand. After showing improved glovework, and the failure of Ambrose to hold down a position in the side, Prior firstly returned to the One Day International side for their 4-0 series victory against South Africa in the summer of 2008. In the first match he scored 42 runs as England won by 20 runs. He made an unbeaten 45 and took six catches in the next match as England secured a ten wicket victory. He continued his good form into the third game of the series to help England win by over 100 runs after hitting 33. He was out for a duck in the fourth game of the series before the fifth match was abandoned due to rain.

Prior kept his place in the ODI side for the tour of India. He made four in the first match of the series as England lost by 158 runs. He made a patience 38 in the next game but England again lost, this time by 54 runs. Prior moved down the order for the final three games of series, but failed to make an impact. He scored five in the third match as England went 3-0 down. In the fourth match he had no time to make a contribution in the back end of the innings and in the final game he again did not bat as England lost the series 5-0. Prior was recalled for the Test series between the two sides and batted well in the first match, making an unbeaten 53 in the first innings and hitting 33 in England’s second innings. However, India chased down a big target for the loss of only four wickets, leaving England 1-0 down in the series. He had little impact in the next match, scoring two in England’s first innings and was not needed to bat in the second as the match ended in a draw.

Named in the Test squad for the away series against the West Indies, Prior played in the First, Second and Third tests. However, with his wife due to give birth, Prior returned to England to witness the birth, with Ambrose deputising. Despite Ambrose making a not out 76, Prior returned for the 5th Test after returning to the Caribbean. Following the return, Prior made his highest Test score (131 not out) in the final Test Match in Trinidad, and celebrated his century by mimicking rocking a baby with his bat to celebrate becoming a father. However, once again his glovework was questionable, as in the same match he broke the world record for byes conceded. Nevertheless, he was declared Man of the Match.[11]