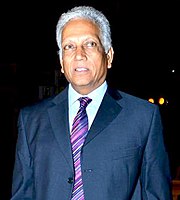 Mohinder was seen in the latter part of his career, as the finest Indian batsman against express pace.[dubious – discuss]

Mohinder made his debut against Australia at Chennai in December 1969,as a quick-bowling all rounder. At his peak he was a top order batsman who mainly played at No. 3 for India. He was also handy with the ball, bowling swingers and cutters with great skill and control. He had a unique run-up where he slowed down as he reached the bowling crease. Behind his seemingly lethargic demeanor were nerves of steel.