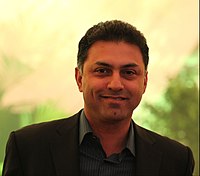 Nikesh Arora (born 9 February 1968) is an Indian businessman who served as a former Google executive. He later served as the president for SoftBank Group, joining the company in October 2014 until stepping down on 21 June 2016. On 1 June 2018 Arora took on the role of CEO and chairman at Palo Alto Networks.

Born to an Indian Air Force Officer, Arora completed his schooling from The Air Force School (Subroto Park), and went on to graduate from Indian Institute of Technology, BHU in Varanasi, India with a Bachelor of Technology degree in Electrical Engineering in 1989. He holds a degree from Boston College and an MBA from Northeastern University. He also holds the CFA designation.

Arora joined Google in 2004. He held multiple senior operating leadership roles at Google, serving as Vice President, Europe Operations from 2004 to 2007, President Europe, Middle East and Africa from 2007 to 2009, and President, Global Sales Operations and Business Development from 2009 to 2010. He was Senior Vice President and Chief Business Officer of Google Inc. (Google) since January 2011 until July 2014.

He left Google in July 2014 resigning from the post of Senior Vice President and Chief Business Officer.

As President & Chief Operating Officer of SoftBank Corp. Arora received over $200 million in compensation over the last two years” while at the head of Softbank’s operations. This pay package made him world’s highest paid executive.

Arora has served on the board of directors at Aviva, Airtel, Colgate-Palmolive, Richemont (Current) Sprint, Softbank, The Harlem Children Zone, Tipping Point (Current) and Yahoo Japan (Chairman). While at Softbank – due to their investing in Ola, Grabtaxi, Didi, Snapdeal, Oyo, Coupang, Guardant, Supercell etc. – he is also CFA which had played a prominent role in his life.

Arora worked as Chief Marketing Officer and as a Member of the Management Board at T-Mobile, Bharti Airtel, Europe and serves as a Trustee at the Paley Center for Media in Los Angeles, California.

Since 2007, Arora has also served as a Senior Advisor to Silver Lake Partners, a private equity firm.

Arora began his career at Fidelity Investments in 1992, holding a variety of finance and technology management positions, ultimately serving as Vice President, Finance of Fidelity Technologies.