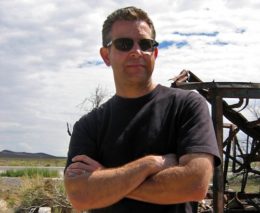 Norman Partridge (born May 28, 1958) is an American author of horror and mystery fiction. He has written two detective novels about retired boxer Jack Baddalach, Saguaro Riptide and The Ten Ounce Siesta. He is also the author of a Crow novel, The Crow: Wicked Prayer, which was adapted in 2005 into the fourth Crow movie, bearing the same name.

Mr. Partridge’s 2006 novel Dark Harvest, published in a limited edition of 2000 autographed copies and 24 lettered edition copies by Cemetery Dance Publications, was voted one of Publishers Weekly’s 100 Best Books of 2006. It also won the 2006 Bram Stoker Award for Best Long Fiction, and has been nominated for two more awards in 2007. Mr. Partridge is currently in talks with a production company about a film option.

His short stories are collected in the volumes Mr. Fox and Other Feral Tales, Bad Intentions, and The Man with the Barbed Wire Fists.

Mr. Fox and Other Feral Tales

The Man with the Barbed-Wire Fists:

Introduction by Edward Bryant
“Mr. Fox”
“The Baddest Son of a Bitch in the House”
“Black Leather Kites”
“Save the Last Dance for Me”
“Sandprint”
“Vessels”
“In Beauty, Like the Night: A Tale of the Living Dead”

This book was re-released in a revised version in 2005 by Subterranean Press with 11 more short stories and authorial commentary about each story (ISBN 1-59606-032-8). Early pre-orders also came with the chapbook Dead Men Tell No Tales. The additional stories are:

“The Oldest Story in the Book”
“At the Battlements of Bannockburn”
“Ten Fingers of Death”
“Style of the Mantis”
“Man, I Just Work Here”
“Wind-Chimes”
“Cutting to the Chase”
“Satans Army”
“My Favorite Rejection Slip”

“Seeing Past the Corners”
“Red Right Hand”
“Coyotes”
“Do Not Hasten to Bid Me Adieu”
“The Man with the Barbed-Wire Fists”
“The Pack”
“Blood Money”
“Last Kiss”
“Blackbirds”
“Wrong Turn”
“Spyder”
“In Beauty, Like the Night”
“Minutes”
“Where the Woodbine Twineth”
“Mr. Fox”
“The Hollow Man”
“Return of the Shroud”
“Tombstone Moon”
“The Mojave Two-Step”
“Cuidado!”
“Carne Muerta”
“Bucket of Blood”
“Undead Origami”
“Harvest”
“The Bars on Satan’s Jailhouse”
Bibliography

“Second Chance”
“The Big Man”
“Lesser Demons”
“Carrion”
“The Fourth Stair up from the Second Landing”
“And What Did You See in the World?”
“Road Dogs”
“The House Inside”
“Durston”
“The Iron Dead”
A Few Words After