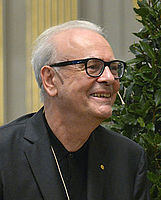 Jean Patrick Modiano (French: ; born 30 July 1945), generally known as Patrick Modiano, is a French novelist and recipient of the 2014 Nobel Prize in Literature. He previously won the 2012 Austrian State Prize for European Literature, the 2010 Prix mondial Cino Del Duca from the Institut de France for lifetime achievement, the 1978 Prix Goncourt for Rue des boutiques obscures, and the 1972 Grand Prix du roman de l’Acadmie franaise for Les Boulevards de ceinture. His works have been translated into more than 30 languages and have been celebrated in and around France, but most of his novels had not been translated into English before he was awarded the Nobel Prize.

Jean Patrick Modiano was born in Boulogne-Billancourt, a commune in the western suburbs of Paris on July 30, 1945. His father, Albert Modiano (1912-77, born in Paris), was of Italian origin; on his paternal side he was descended from a Sephardic family of Thessaloniki, Greece. His mother, Louisa Colpeyn (1918-2015), was a Belgian (Flemish) actress. Modiano’s parents met in occupied Paris during World War II and began their relationship semi-clandestinely (they separated shortly after Patrick’s birth). His father had refused to wear the Yellow badge and did not turn himself in when Paris Jews were rounded up for deportation to Nazi concentration camps. He was picked up in February 1942, and narrowly missed being deported, after an intervention from a friend. During the war years Albert did business on the black market, hanging around with the Carlingue, the French Gestapo auxiliaries. Its leaders were recruited from the underworld. Albert Modiano never clearly spoke of this period to his son before his death in 1977.

Patrick Modiano’s childhood took place in a unique atmosphere. He was initially brought up by his maternal grandparents who taught him Flemish as his first language. The absence of his father, and frequently also of his mother, on tour, brought him closer to his two-year-younger brother, Rudy, who suddenly died of a disease at age 9 (Patrick Modiano dedicated his works from 1967 to 1982 to his brother). Recalling this tragic period in his famed memoir Un Pedigree (2005), Modiano said: “I couldn’t write an autobiography, that’s why I called it a ‘pedigree’: It’s a book less on what I did than on what others, mainly my parents, did to me.”

As a child, Modiano studied at the cole du Montcel primary school in Jouy-en-Josas, at the Collge Saint-Joseph de Thnes in Haute-Savoie, and then at the Lyce Henri-IV high school in Paris. While he was at Henri-IV, he took geometry lessons from writer Raymond Queneau, who was a friend of Modiano’s mother. He received his baccalaurat in Annecy in 1964. He was enrolled by his father in hypokhgne against his will and soon stopped attending classes. In 1965, he enrolled at the Sorbonne in order to get a college deferment to draft, but did not get any degree.

In 1970, Modiano married Dominique Zehrfuss. In a 2003 interview with Elle, she said: “I have a catastrophic memory of the day of our marriage. It rained. A real nightmare. Our groomsmen were Queneau, who had mentored Patrick since his adolescence, and Malraux, a friend of my father. They started to argue about Dubuffet, and it was like we were watching a tennis match! That said, it would have been funny to have some photos, but the only person who had a camera forgot to bring the film. There is only one photo remaining of us, from behind and under an umbrella!” They had two daughters, Zina (1974) and Marie (1978).

His meeting with Queneau, author of Zazie dans le mtro, was crucial. It was Queneau who introduced Modiano to the literary world, giving him the opportunity to attend a cocktail party thrown by his future publisher ditions Gallimard. In 1968 at the age of 22, Modiano published his first book La Place de l’toile, a wartime novel about a Jewish collaborator, after having read the manuscript to Queneau. The novel displeased his father so much that he tried to buy all existing copies of the book. Earlier (1959) while stranded in London, Modiano had called his father to request a little financial assistance, but his father had rebuffed him. Another time (1965), his mother sent Patrick to the father’s apartment to demand a tardy child-support payment, and in response the father’s girlfriend called the police. From his first novel – which has been awarded the Fnon Prize and Roger Nimier Prize – , Modiano has written about “the pull of the past, the threat of disappearance, the blurring of moral boundaries, the dark side of the soul. “

The 2010 release of the German translation of La Place de l’toile won Modiano the German Preis der SWR-Bestenliste (Prize of the Southwest Radio Best-of List) from the Sdwestrundfunk radio station, which hailed the book as a major post-Holocaust work.La Place de l’toile was published in English in August 2015 together with two other of Modiano’s wartime novels, under the title, The Occupation Trilogy.

In 1973, Modiano co-wrote the screenplay of Lacombe, Lucien, a film co-written and directed by Louis Malle; it focuses on a boy joining the fascist Milice after being denied admission to the French Resistance. The film caused controversy due to the lack of justification of the main character’s political involvement.

Modiano’s novels all delve into the puzzle of identity, and of trying to track evidence of existence through the traces of the past. Obsessed with the troubled and shameful period of the Occupationduring which his father had allegedly engaged in shady dealingsModiano returns to this theme in all of his novels, book after book building a remarkably homogeneous work. “After each novel, I have the impression that I have cleared it all away,” he says. “But I know I’ll come back over and over again to tiny details, little things that are part of what I am. In the end, we are all determined by the place and the time in which we were born.” He writes constantly about the city of Paris, describing the evolution of its streets, its habits and its people.

All of Modiano’s works are written from a place of “mania.” In Rue des Boutiques obscures (published in English as Missing Person), the protagonist suffers from amnesia and travels from Polynesia to Rome in an effort to reconnect with his past. The novel addresses the never-ending search for identity in a world where “the sand holds the traces of our footsteps but a few moments.” In Du plus loin de l’oubli (Out of the Dark), the narrator recalls his shadowy love affair in the 1960s with an enigmatic woman. Fifteen years after their breakup, they meet again, but she has changed her name and denies their past. What is real and what is not remain to be seen in the dreamlike novel that typifies Modiano’s obsessions and elegiac prose.

The theme of memory is most clearly at play in Dora Bruder (entitled The Search Warrant in some English-language translations). Dora Bruder is a literary hybrid, fusing together several genres biography, autobiography, detective novel to tell the history of its title character, a 15-year-old daughter of Eastern European Jewish immigrants, who, after running away from the safety of the convent that was hiding her, ends up being deported to Auschwitz. As Modiano explains in the opening of his novel, he first became interested in Dora’s story when he came across her name in a missing persons headline in a December 1941 edition of the French newspaper Paris Soir. Prompted by his own passion for the past, Modiano went to the listed address, and from there began his investigation, his search for memories. He wrote by piecing together newspaper cuttings, vague testimonies and old telephone directories, looking at outsider living on the outskirts of the city. Regarding Dora Bruder, he wrote: “I shall never know how she spent her days, where she hid, in whose company she passed the winter months of her first escape, or the few weeks of spring when she escaped for the second time. That is her secret.” Modianos quiet, austere novels, which also include Night Moves, are described as reading like “compassionate, regretful thrillers.”

Modiano’s 2007 novel Dans le caf de la jeunesse perdue is set in 1960s Paris where a group of people, including a detective of shady background, wonder what is or was the matter with a certain young woman called Louki, who, we are told on the last page, ended her life by throwing herself out a window. Even though there are plenty of geographical details, the reader is left with a sense of vagueness as to what happened and when. For the first time throughout his oeuvre, Modiano uses various narrators who relate from their point of view what they think they know about the woman. In the third of five chapters, the protagonist herself relates episodes from her life, but she remains difficult to grasp. The author creates a number of instabilities on various levels of his text and this signifies how literary figures can(not) be created. The protagonist evades being grasped.

In Modiano’s 26th book, L’Horizon (2011), the narrator, Jean Bosmans, a fragile man pursued by his mother’s ghost, dwells on his youth and the people he has lost. Among them is the enigmatic Margaret Le Coz, a young woman whom he met and fell in love with in the 1960s. The two loners spent several weeks wandering the winding streets of a now long-forgotten Paris, fleeing a phantom menace. One day, however, without notice, Margaret boarded a train and vanished into the voidbut not from Jean’s memory. Forty years later, he is ready to look for his vanished love. The novel not only epitomizes Modiano’s style and concerns but also marks a new step in his personal quest, after a mysterious walkabout in Berlin. “The city is my age,” he says, describing Berlin which is almost a completely new city rebuilt from the ashes of war. “Its long, geometric avenues still bear the marks of history. But if you look at it right, you can still spot ancient wastelands beneath the concrete. These are the very roots of my generation.” Besson remarks that such symbolic roots gave rise, over the years, “to one of the most wonderful trees in French literature.”

Modiano is also one of the 8 members of the jury of the French literary award Prix Contrepoint.

Modiano’s first novel, La Place de l’toile, received both the Prix Fnon and the Prix Roger-Nimier in 1968. He won the Prix Goncourt in 1978 for his novel Rue des boutiques obscures (Missing Person) and the Grand Prix du roman de l’Acadmie franaise in 1972 for Les Boulevards de ceinture. He also won the 2010 Prix mondial Cino Del Duca from the Institut de France for his lifetime achievement, and the 2012 Austrian State Prize for European Literature.

Called the “Marcel Proust of our time”, he was awarded the 2014 Nobel Prize in Literature “for the art of memory with which he has evoked the most ungraspable human destinies and uncovered the life-world of the Occupation“. He heard the news via a mobile phone call from his daughter while walking through Paris, “just next to the Jardin du Luxembourg” where he lives. The Nobel was unexpected, even to those in the Anglo-American world most familiar with his work. The puzzlement is likely related to limited knowledge of Modiano in the English-speaking world; despite his prolific output, fewer than a dozen of his works had been translated into English, and several of those were out of print before the Academy’s announcement. The award-winning Missing Person had sold just 2,425 copies in the US prior to the Nobel. Even Peter Englund, the permanent secretary of the Swedish Academy, noted that many people outside France would likely be unfamiliar with Modiano and his work. He is well-known in France, but not anywhere else, he said in a post-announcement interview.Yale University Press quickly published three of his novels in English.