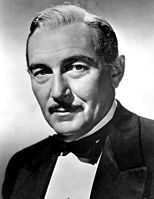 Lukas was born Pl Lukcs in Budapest into a Jewish family, the son of Adolf Munkcsi and Mria Schneckendorf. He was later adopted by Mria (ne Zilahy) and Jnos Lukcs, an advertising executive.

Lukas made his stage debut in Budapest in 1916 and his film debut in 1917. At first, he played elegant, smooth womanizers, but increasingly he became typecast as a villain. He had a successful stage and film career in Hungary, Germany, and Austria, where he worked with Max Reinhardt. He arrived in Hollywood in 1927 and became a naturalized citizen of the United States in 1937. He was busy in the 1930s, appearing in such films as the melodrama Rockabye, the crime caper Grumpy, Alfred Hitchcock‘s The Lady Vanishes, the comedy Ladies in Love, and the drama Dodsworth. He followed William Powell and Basil Rathbone portraying the series detective Philo Vance, a cosmopolitan New Yorker, once in The Casino Murder Case (1935).

His major film success came in Watch on the Rhine (1943), where he played a man working against the Nazis, a role he originated in the Broadway premiere of the play of the same name in 1941. His portrayal of Kurt Mueller, a German migr with an American wife, played by Bette Davis, was universally lauded by critics. Brooks Atkinson of the New York Times, wrote, “As the enemy of fascism, Mr. Lukas’ haggard, loving, resourceful determination becomes heroic by virtue of his sincerity and his superior abilities as an actor.” He won the Academy Award for Best Actor for the role, winning out over luminary efforts as Humphrey Bogart in Casablanca, Gary Cooper in For Whom the Bell Tolls, Walter Pidgeon in Madame Curie, and Mickey Rooney in The Human Comedy. He also received the New York Film Critics Award for his performance.

In 1943, he guest starred as the eponymous character in an episode of the radio program Suspense, “Mr. Markham, Antique Dealer”. On April 2, 1944, he starred in “The Steadfast Heart” on Silver Theater.

Modern viewers also remember Lukas for his role as Professor Aronnax in Walt Disney‘s film version of Jules Verne‘s 20,000 Leagues Under the Sea (1954). By that time, however, he was, at age 60, suffering from memory problems during the production, apparently leading him to lash out at cast and crew alike. Even friend Peter Lorre was not immune to the abuse.

In the 1940s, Lukas was a charter member of the Motion Picture Alliance for the Preservation of American Ideals, a conservative lobbying group opposed to possible Communist influence in Hollywood.

Lukas’ film career picked up momentum in the 1960s with six films, including Fun in Acapulco with Elvis Presley in 1963 and Lord Jim with Peter O’Toole in 1965. His final film, The Challenge, was released in 1970.

The remainder of his career moved from Hollywood to the stage to television. His only singing role was as Cosmo Constantine in the original 1950 Broadway stage version of Irving Berlin‘s Call Me Madam, opposite Ethel Merman (although he is heard singing a song in the 1933 film Little Women, displaying a pleasant voice).

Lukas died August 15, 1971, in Tangier, Morocco, reportedly while searching for a place to spend his retirement years. He is buried in Spain.

Lukas was honored with a star on the Hollywood Walk of Fame at 6821 Hollywood Boulevard on February 8, 1960.