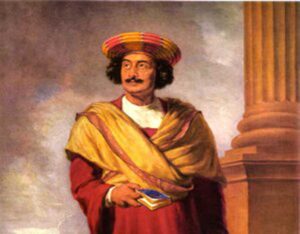 Raja Ram Mohan Roy (22 May 1772 – 27 September 1833) was the founder of the Brahmo Sabha movement in 1828, which engendered the Brahmo Samaj, an influential socio-religious reform movement. His influence was apparent in the fields of politics, public administration and education as well as religion. He was known for his efforts to establish the abolishment of the practice of sati, the Hindu funeral practice in which the widow was compelled to sacrifice herself in her husbands funeral pyre in some parts of Bengal.

The religious reforms of Roy contained in some beliefs of the Brahmo Samaj expounded by Rajnarayan Basu are:-

Roy’s political background fit influenced his social and religious to reforms of Hinduism. He writes,

“The present system of Hindus is not well calculated to promote their political interests. It is necessary that some change should take place in their religion, at least for the sake of their political advantage and social comfort.”

Ram Mohan Roy’s experience working with the British government taught him that Hindu traditions were often not credible or respected by western standards and this no doubt affected his religious reforms. He wanted to legitimise Hindu traditions to his European acquaintances by proving that “superstitious practices which deform the Hindu religion have nothing to do with the pure spirit of its dictates!” The “superstitious practices”, to which Ram Mohan Roy objected, included sati, caste rigidity, polygamy and child marriages. These practices were often the reasons British officials claimed moral superiority over the Indian nation. Ram Mohan Roys ideas of religion actively sought to create a fair and just society by implementing humanitarian practices similar to Christian ideals and thus legitimise Hinduism in the modern world.

Epitaph for Ram Mohan Roy on his Mausoleum Ram Mohan Roy was originally buried on 18 October 1833, in the grounds of Stapleton Grove where he had died of meningitis on 27 September 1833. Nine and a half years later he was reburied on 29 May 1843 in a grave at the new Arnos Vale Cemetery, in Brislington, East Bristol. A large plot on The Ceremonial Way there, had been bought by William Carr and William Prinsep, and the body in its lac and lead coffin was placed later in a deep brick-built vault, over seven feet underground. Two years after this Dwarkanath Tagore helped pay for the chattri raised above this vault, although there is no record of his ever visiting Bristol. The chattri was designed by the artist William Prinsep, who had known Ram Mohan in Calcutta. The Raja’s remains are still there, despite a misleading story first suggested by the Adi Brahmo Samaj Press, and unfortunately repeated later by one (or more) historians, without proper evidence or citation. The coffin has been seen in situ by the Trustee in charge of the 2006/7 repairs to the chattri, which were funded by Aditya Poddar of Singapore.

The original brief epitaph,”Rammohun Roy, died Stapleton 27th. Sept. 1833″, was suggested by Dwarkanath Tagore, but this plaque was removed to the rear of the tomb by Rev. Rohini Chaterji (sic), who was descended from Radha Prasad Roy. His new and more expansive epitaph was placed at the front. The epitaph reads:

“A conscientious and steadfast believer in the Unity of Godhead, He consecrated his life with entire devotion to the worship of the divine spirit alone, to great natural talents, he united through mastery of many languages and early distinguished himself as one of the greatest scholars of the day. His unwearied labour to promote the social, moral and physical condition of the people of India, his earnest endeavours to suppress idolatry and the rite of suttee and his constant zealous advocacy of whatever tended to advance the glory of God and the welfare of man live in the grateful remembrance of his countrymen. This tablet records the sorrow and pride with which his memory is cherished by his descendants.
He was born at Radhanagore in Bengal in 1772 and died at Bristol on September 27th 1833.”

The Indian High Commission often come to the annual Commemoration of the Raja in September, whilst Bristol’s Lord Mayor is always in attendance. The Commemoration is a joint Brahmo-Unitarian service for about 100 people. Brahmo and Unitarian prayers and hymns are sung before the tomb, flowers are laid, and the life of the Raja celebrated in a service. In 2013 a recently discovered ivory bust of Ram Mohan was displayed, in 2014 his original death mask at Edinburgh was filmed and its history discussed.

In September 2008, representatives from the Indian High Commission came to Bristol to mark the 175th anniversary of Ram Mohan Roy’s death. During the ceremony Brahmo and Unitarian prayers were recited and songs of Ram Mohan and other Brahmosangeet were performed.

Following on from this visit the Mayor of Kolkata, Bikash Ranjan Bhattacharya (who was amongst the representatives from the India High Commission) decided to raise funds to restore the mausoleum.

In 1983, a full scale Exhibition on Ram Mohan Roy was held in Bristol’s Museum and Art Gallery. His enormous 1831 portrait by Henry Perronet Briggs still hangs there, and was the subject of a talk by Sir Max Muller in 1873. At Bristol’s Centre, on College Green, is a full size bronze statue of the Raja by the modern Kolkata sculptor, Niranjan Pradhan. Another bust by Pradhan, gifted to Bristol by Joyti Basu, sits inside the main foyer of Bristol’s City Hall. A pedestrian path at Stapleton has been named “Rajah Rammohun Walk”. There is a 1933 Brahmo plaque on the outside west wall of Stapleton Grove, and his first burial place in the garden is marked by railings and a granite memorial stone. His tomb and chattri at Arnos Vale are listed Grade II* by English Heritage, and attract many admiring visitors today.