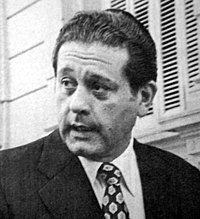 Favaloro was born and raised in La Plata. At an early age he developed a love for football, favoring Gimnasia y Esgrima La Plata, a popular club in the city.

He was admitted into the Colegio Nacional de La Plata in 1936. After graduating from high school, he was admitted to the School of Medicine at the National University of La Plata. During his third year, he began his medical residency at the Hospital Policlínico San Martín, a medical center that received the most complicated cases from much of Buenos Aires province. This residency brought him into contact with patients for the first time. He attended procedures carried out by professors José María Mainetti and Federico E. B. Christmann, from whom he learned the simplicity and standardization that he would later apply to cardiovascular surgery, one of his many great contributions to cardiovascular operating techniques. Favaloro graduated with a medical degree in 1949.

Following graduation, he applied for a position as a medical auxiliary, but the offer required him to enroll in the Peronist Party, something he did not accept. He then moved to a small town named Jacinto Aráuz in La Pampa Province after being offered a job as the town’s doctor; when the resident doctor died, he succeeded him and brought his brother Juan José into the clinic. He married María Antonia Delgado in 1951.

Favaloro and his brother endeavored to improve the general level of health in what was then a remote region. They trained and educated the general public, teachers, and nurses and improved health-care delivery. They equipped the town with an operating room, X-ray and improved the laboratory thereby providing essential surgical and diagnostic tools.

Favaloro became interested in developments in cardiovascular intervention, and developed an enthusiasm for thoracic surgery. During one visit to La Plata, he met Professor Mainetti, who pointed him in the direction of the Cleveland Clinic. Although in the beginning he had doubts about leaving his profession as a rural physician, he thought that he could make a greater contribution to the community on returning from the United States. With few resources and rudimentary English, he decided to travel to Cleveland. He first worked as a resident and later as a member of the surgical team, working with Donald B. Effler, head of cardiovascular surgery, F. Mason Sones, Jr., who was in charge of the Angiography Laboratory and William L. Proudfit, head of the Department of Cardiology.

In the beginning, the major part of his work revolved around valvular and congenital diseases; later on he became interested in other areas. Every day, having hardly finished working in the operating room, Favaloro would spend hours and hours reviewing coronary angiograms and studying coronary arteries and their relation with the cardiac muscle. The laboratory of Sones, father of the coronary angiography, had the largest collection of angiograms in the United States.

At the beginning of 1967, Favaloro began to consider the possibility of using the saphenous vein in coronary surgery. He put his ideas into practice for the first time in May of that year. The basic principle was to bypass a diseased (obstructed) segment in a coronary artery in order to deliver blood flow distally. The standardization of this technique, called bypass or transmyocardial revascularization surgery, was the fundamental work of his career, and ensured that his prestige would transcend the limits of his country, as the procedure radically changed the treatment of coronary disease. In 1970 he published one of his best-known volumes, Surgical Treatment of Coronary Arteriosclerosis.

The creation of the Favaloro Foundation

Favaloro returned to Argentina in 1971 with the dream of developing a center of excellence similar to the Cleveland Clinic, that combined medical attention, research and education.

Bearing that in mind he founded the Fundación Favaloro in 1975 along with other collaborators. He took great pride in having trained more than 450 residents from all over Argentina and the Americas. Favaloro contributed to raise the standard level of his specialty for the benefit of patients through innumerable courses, seminars and conferences organized by the Fundación, among them the distinguished ‘Cardiology for the Consultant’ (Cardiología para el Consultante) held every two years.

In 1980 Favaloro established the ‘Basic Investigation Laboratory’ (Laboratorio de Investigación Básica), which was long financed with his own money and which, at the time, depended upon the support of the Research and Teaching Department of the Fundación Favaloro. Subsequently it became the Institute of Research in Basic Sciences of the University Institute of Biomedical Sciences (Instituto de Investigación en Ciencias Básicas del Instituto Universitario de Ciencias Biomédicas) which in turn, was transformed into the Universidad Favaloro in August 1998.

In 1992 the nonprofit Favaloro Foundation Institute of Cardiology and Cardiovascular Surgery (Instituto de Cardiología y Cirugía Cardiovascular de la Fundación Favaloro) opened in Buenos Aires. With the motto “advanced technology in the service of medical humanism”, this institute offers highly specialized services of cardiology, cardiovascular surgery and heart, lung, cardiopulmonary, liver, kidney, and bone marrow transplants, among other areas. Favaloro focused his career there, surrounded by a selected group of professionals. One of his more famous patients was boxing promoter and Luna Park arena owner Tito Lectoure, on whom Dr. Favaloro operated in 1990. It should be mentioned, however, that despite the immense costs of bypass surgery, Dr Favaloro operated daily on indigent patients, something that he felt was both a necessity and his obligation.

He kept his emphasis on disease prevention and promoting basic rules of hygiene to reduce mortality rate. With that objective, the Fundación Favaloro researches illness detection and prevention programs. Also, many publications were released by the Centro Editor de la Fundación Favaloro (Publishing Center of the Favaloro Foundation), which ceased to operate in 2000.The Favaloro Foundation is currently one of the largest institutions dedicated to cardiology in the Americas.

By the year 2000, Argentina was submerged in an economic and political crisis, and the Favaloro Foundation was US$18 million in debt. On repeated occasions, Favaloro petitioned the Argentine government to aid the Foundation, but he never received an official response. Nor would the director of the PAMI public medical insurance agency, Horacio Rodríguez Larreta, agree to pay the agency’s debt to the Foundation. On July 29 of that year, Favaloro committed suicide by shooting himself in the heart.

Following his suicide, it was revealed that he had written a letter to Argentine President Fernando de la Rúa, that had never been read, in which he expressed being tired of “being a beggar in his own country,” and asked for de la Rúa’s help to raise money to help the Foundation.

Although his suicide is often linked to the Foundations financial difficulties, the letter clearly shows Favaloro overwhelmed by the corruption of the health system and feeling that he could not fight against this powerful organization. In some parts of the letter, he refers to himself as Don Quijote in his lonely battle against the giants. Aggravating this situation was that Favaloro had never recovered from the death of his wife in 1998. Following her death, he had resolved to marry one of his longtime colleagues and coauthors, Diana Truden; she lived with Favaloro during his final days and was in his Palermo neighborhood house when he committed suicide.

Favaloro was an active member of 26 societies, corresponding of 4, and honorary of 43. He received innumerable international distinctions. The ones that stand out are: John Scott Prize 1979, granted by Philadelphia; the creation of the Chair of Cardiovascular Surgery “Dr René G. Favaloro” (Tel Aviv University, Israel, 1980); the distinction of the Fundación Conchita Rábago de Giménez Díaz (Madrid, Spain, 1982); the Teacher Prize of Argentinian Medicine (1986); the Distinguished Alumnus Award of the Cleveland Clinic Foundation (1987); The Gairdner Foundation International Award, granted by the Gairdner Foundation (Toronto, Canada, 1987); the René Leriche Prize 1989, granted by the International Surgery Society; the Gifted Teacher Award, granted by the American College of Cardiology (1992); the Golden Plate Award of the American Academy of Achievement (1993); the Diamond Konex Award as the most important Scientist in the last decade in his country (Argentina, 1993); the Prince Mahidol Award, granted by His Majesty the King of Thailand (Bangkok, Thailand, 1999).

Favaloro participated in educational programming for the public, distinguishing himself in the television series The great medical themes, and in numerous conferences in Argentina and throughout the world on topics such as medicine, education, and modern society. He was also mentioned in the documentary movie Forks over Knives.