Heinrich Hermann Robert Koch (11 December 1843 – 27 May 1910) was a German physician and microbiologist. As one of the main founders of modern bacteriology, he identified the specific causative agents of tuberculosis, cholera, and anthrax and also gave experimental support for the concept of infectious disease, which included experiments on humans and other animals. Koch created and improved laboratory technologies and techniques in the field of microbiology, and made key discoveries in public health. His research led to the creation of Koch’s postulates, a series of four generalized principles linking specific microorganisms to specific diseases that remain today the “gold standard” in medical microbiology. For his research on tuberculosis, Koch received the Nobel Prize in Physiology or Medicine in 1905. The Robert Koch Institute is named in his honour.

Koch was born in Clausthal, Germany, on 11 December 1843, to Hermann Koch (1814-1877) and Mathilde Julie Henriette (ne Biewend; 1818-1871). Koch excelled in academics from an early age. Before entering school in 1848, he had taught himself how to read and write. He graduated from high school in 1862, having excelled in science and math. At the age of 19, Koch entered the University of Gttingen, studying natural science. However, after three semesters, Koch decided to change his area of study to medicine, as he aspired to be a physician. During his fifth semester of medical school, Jacob Henle, an anatomist who had published a theory of contagion in 1840, asked him to participate in his research project on uterine nerve structure. In his sixth semester, Koch began to research at the Physiological Institute, where he studied the secretion of succinic acid, which is a signaling molecule that is also involved in the metabolism of the mitochondria. This would eventually form the basis of his dissertation. In January 1866, Koch graduated from medical school, earning honors of the highest distinction.

Several years after his graduation in 1866, he worked as a surgeon in the Franco-Prussian War, and following his service, worked as a physician in Wollstein in Prussian Posen (now Wolsztyn, Poland). From 1880 to 1885, Koch held a position as government advisor with the Imperial Department of Health. Koch began conducting research on microorganisms in a laboratory connected to his patient examination room. Koch’s early research in this laboratory yielded one of his major contributions to the field of microbiology, as he developed the technique of growing bacteria. Furthermore, he managed to isolate and grow selected pathogens in pure laboratory culture.

From 1885 to 1890, he served as an administrator and professor at Berlin University.

In 1891, Koch relinquished his Professorship and became a director of the Prussian Institute for Infectious Diseases [de] which consisted of a clinical division and beds for the division of clinical research. For this he accepted harsh conditions. The Prussian Ministry of Health insisted after the 1890 scandal with tuberculin, which Koch had discovered and intended as a remedy for tuberculosis, that any of Koch’s inventions would unconditionally belong to the government and he would not be compensated. Koch lost the right to apply for patent protection.

In an attempt to grow bacteria, Koch began to use solid nutrients such as potato slices. Through these initial experiments, Koch observed individual colonies of identical, pure cells. He found that potato slices were not suitable media for all organisms, and later began to use nutrient solutions with gelatin. However, he soon realized that gelatin, like potato slices, was not the optimal medium for bacterial growth, as it did not remain solid at 37 C, the ideal temperature for growth of most human pathogens. As suggested to him by Walther and Fanny Hesse, Koch began to utilize agar to grow and isolate pure cultures, because this polysaccharide remains solid at 37 C, is not degraded by most bacteria, and results in a transparent medium.

During his time as government advisor, Koch published a report, in which he stated the importance of pure cultures in isolating disease-causing organisms and explained the necessary steps to obtain these cultures, methods which are summarized in Koch’s four postulates. Koch’s discovery of the causative agent of anthrax led to the formation of a generic set of postulates which can be used in the determination of the cause of most infectious diseases. These postulates, which not only outlined a method for linking cause and effect of an infectious disease but also established the significance of laboratory culture of infectious agents, are listed here:

Robert Koch is widely known for his work with anthrax, discovering the causative agent of the fatal disease to be Bacillus anthracis. He discovered the formation of spores in anthrax bacteria, which could remain dormant under specific conditions. However, under optimal conditions, the spores were activated and caused disease. To determine this causative agent, he dry-fixed bacterial cultures onto glass slides, used dyes to stain the cultures, and observed them through a microscope. His work with anthrax is notable in that he was the first to link a specific microorganism with a specific disease, rejecting the idea of spontaneous generation and supporting the germ theory of disease. 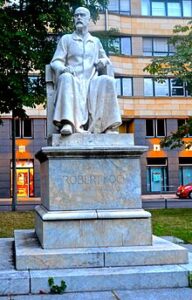 Statue of Koch in Berlin

During his time as the government advisor with the Imperial Department of Health in Berlin in the 1880s, Robert Koch became interested in tuberculosis research. At the time, it was widely believed that tuberculosis was an inherited disease. However, Koch was convinced that the disease was caused by a bacterium and was infectious, and tested his four postulates using guinea pigs. Through these experiments, he found that his experiments with tuberculosis satisfied all four of his postulates. In 1882, he published his findings on tuberculosis, in which he reported the causative agent of the disease to be the slow-growing Mycobacterium tuberculosis. Later, Koch’s attempt at developing a drug to treat tuberculosis, tuberculin, led to a scandalous failure: he did not divulge the exact composition, and the claimed treatment success did not materialize; the substance is today used for tuberculosis diagnosis.

Koch and his relationship to Paul Ehrlich, who developed a mechanism to diagnose TB, were portrayed in the 1940 movie Dr. Ehrlich’s Magic Bullet.

Koch next turned his attention to cholera, and began to conduct research in Egypt in the hopes of isolating the causative agent of the disease. However, he was not able to complete the task before the epidemic in Egypt ended, and after a short trip to Persia traveled to India to continue with the study. In 1884 in Bombay state of India (the present day State of Maharastra, India), Koch resided and researched at Grant Medical College, (or by some accounts in Kolkata, formerly Calcutta in undivided British India) where he was able to determine the causative agent of cholera, isolating Vibrio cholerae. The bacterium had originally been isolated in 1854 by Italian anatomist Filippo Pacini, but its exact nature and his results were not widely known.

Koch observed the phenomenon of acquired immunity. On December 26, 1900, he arrived as part of an expedition to German New Guinea, which was then a protectorate of the German Reich. Koch serially examined the Papuan people, the indigenous inhabitants, and their blood samples and noticed they contained Plasmodium parasites, the cause of malaria, but their bouts of malaria were mild or could not even be noticed, i.e. were subclinical. On the contrary, German settlers and Chinese workers, who had been brought to New Guinea, fell sick immediately. The longer they had stayed in the country, however, the more they too seemed to develop a resistance against it.

Koch’s name as it appears on the LSHTM frieze in Keppel Street, Bloomsbury, London

In 1897, Koch was elected a Foreign Member of the Royal Society (ForMemRS). In 1905, Koch won the Nobel Prize in Physiology and Medicine for his work with tuberculosis.In 1906, research on tuberculosis and tropical diseases won him the Prussian Order Pour le Merite and in 1908, the Robert Koch Medal, established to honour the greatest living physicians.

Koch’s name is one of 23, from the fields of hygiene and tropical medicine, featured on the frieze of the London School of Hygiene & Tropical Medicine building in Keppel Street, Bloomsbury.

A large marble statue of Koch stands in a small park known as Robert Koch Platz, just north of the Charity Hospital, in the Mitte section of Berlin. His life was the subject of a 1939 German produced motion picture that featured Oscar winning actor Emil Jannings in the title role. On 10 December 2017, Google showed a Doodle in celebration of Koch’s birthday.

On 9 April 1910, Koch suffered a heart attack and never made a complete recovery. On 27 May, three days after giving a lecture on his tuberculosis research at the Prussian Academy of Sciences, Koch died in Baden-Baden at the age of 66. Following his death, the Institute named its establishment after him in his honour. He was irreligious.