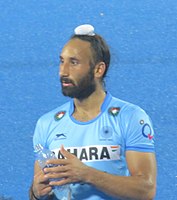 Sardara Singh (born 15 July 1986) sometimes referred as Sardar Singh, is an Indian professional field hockey player and captain of the Indian national team.[2] He usually plays the center half position.[3] Sardara became the youngest player to captain the Indian team when he led the side at the 2008 Sultan Azlan Shah Cup.[4] He was awarded Padma Shri, the fourth highest civilian award of India, in 2015.[5] On 13 July 2016, the responsibilities of the captain were handed over from him to P. R. Shreejesh, the goalkeeper of Indian Team.[6] On 12 September 2018, Sardara announced his retirement from international hockey. He played 314 matches during 12 years in his career.[7]

Sardara was born in Haryana’s village Sant Nagar in Sirsa District[8] to Gurnam Singh, a RMP doctor and Jasveer Kaur, a housewife.[9]

Sardara Singh made his debut for India in the junior team during India’s 2003-04 tour of Poland. He made his senior debut against Pakistan in 2006.[10] He also plays for his state of Haryana. He is a Deputy Superintendent Police Officer with the Haryana Police and plays for their team.[11] Singh played for Chandigarh Dynamos in the inaugural season of the Premier Hockey League in 2005. He played for Hyderabad Sultans in the next three seasons till 2008, captaining the side.[12]

In 2010, he was included in the 18-men FIH All-Star team.[13] In the same year, Singh was signed by the Belgian club, KHC Leuven to play in the Belgian Hockey League.[13] In 2011, he was again named on the FIH All-Star team.[14] Following Singh’s impressive showing at the 2013 Asia Cup, he was signed by the Dutch club, HC Bloemendaal as a replacement to Teun de Nooijer.[15]

On 13 July 2016, the responsibilities of the captain were handed over from him to P. R. Shreejesh, the goalkeeper of Indian Team. He has captained Indian team for 8 years.

Sardar Singh became the highest-paid marquee player at the inaugural Hockey India League auctions as the Delhi franchise bought him for US$78,000 (42.49 lakh). The Delhi team was named Delhi Waveriders.[16] He captained his side to finish on second place in its inaugural season and was awarded the ‘Player of the Tournament.’[17] He was honoured with Rajiv Gandhi Khel Ratna Award

Sardar Singh is making his first Punjabi Music Industry debut by featuring in song Gallan Karraiyan by veteran Punjabi singer Hardeep Singh of Shehar Patiale de fame.[18] The song is written by Sukha Wadali and the music is by Jaidev Kumar.