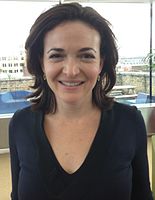 Sheryl Kara Sandberg (born August 28, 1969)[2] is an American social media executive, author, and billionaire. She is the chief operating officer (COO) of Facebook and founder of LeanIn.Org. In June 2012, she was elected to Facebook’s board of directors by existing board members,[3] becoming the first woman to serve on its board. Before she joined Facebook as its COO, Sandberg was vice president of global online sales and operations at Google, and was involved in launching Google’s philanthropic arm Google.org. Before Google, Sandberg served as chief of staff for United States Secretary of the Treasury Lawrence Summers.

Sandberg was born in 1969 in Washington, D.C. to a Jewish family,[9][10] the daughter of Adele (ne Einhorn) and Joel Sandberg, and the oldest of three children.[2][11] Her father is an ophthalmologist, and her mother was a college teacher of French language.[9]

Her family moved to North Miami Beach, Florida when she was two years old.[9] She attended North Miami Beach High School, where she graduated with a 4.646 grade point average.[9][12] She was sophomore class president, became a member of the National Honor Society, and was on the senior class executive board.[12] Sandberg taught aerobics in the 1980s while in high school.[13]

In 1993, she enrolled at Harvard Business School and in 1995 she earned her MBA with highest distinction.[15] In her first year of business school, she earned a fellowship.[18]

After graduating from business school in the spring of 1995, Sandberg worked as a management consultant for McKinsey & Company for approximately one year (1995-1996). From 1996 to 2001 she again worked for Larry Summers, who was then serving as the United States Secretary of the Treasury under President Bill Clinton. Sandberg assisted in the Treasury’s work on forgiving debt in the developing world during the Asian financial crisis.[17]

She later joined Google, where she was responsible for online sales of Google’s advertising and publishing products as well as for sales operations of Google’s consumer products and Google Book Search.[19] During her time at Google, she grew the ad and sales team from four people to 4,000.[20]

In late 2007, Mark Zuckerberg, co-founder and chief executive of Facebook, met Sandberg at a Christmas party held by Dan Rosensweig.[9] Zuckerberg had no formal search for a Chief Operating Officer (COO), but thought of Sandberg as “a perfect fit” for this role.[9] In March 2008, Facebook announced the hiring of Sandberg for the role of COO and her leaving Google.[21]

After joining the company, Sandberg quickly began trying to figure out how to make Facebook profitable. Before she joined, the company was “primarily interested in building a really cool site; profits, they assumed, would follow.”[9] By late spring,[when?] Facebook’s leadership had agreed to rely on advertising, “with the ads discreetly presented”; by 2010, Facebook became profitable.[9] According to Facebook, she oversees the firm’s business operations including sales, marketing, business development, human resources, public policy, and communications.[22] In 2012 she became the eighth member (and the first woman) of Facebook’s board of directors.[23]

In April 2014, it was reported that Sandberg had sold over half of her shares in Facebook since the company went public. At the time of Facebook’s IPO she held approximately 41 million shares in the company; after several rounds of sales she is left with around 17.2 million shares, amounting to a stake of 0.5% in the company, worth about $1 billion.[24]

The New York Times published a report in 2018 detailing Sandberg’s role in handling Facebook’s public relations after revelations of Russian interference in the 2016 United States elections and its Cambridge Analytica data scandal.[25] Soon after, on November 29, 2018, the New York Times reported that Sandberg had personally asked Facebook’s communications staff to conduct research into George Soros‘s finances days after Soros publicly criticized tech companies, including Facebook, at the World Economic Forum.[26] In a statement, Facebook said the research into Soros “was already underway when Sheryl sent an email asking if Mr. Soros had shorted Facebook’s stock.”[26]

According to The Wall Street Journal, during a meeting Mark Zuckerberg blamed Sandberg personally for the outcome of the Cambridge Analytica scandal, stating that Zuckerberg “blamed her and her teams for the public fallout over Cambridge Analytica,”[27] and that Sandberg “confided in friends that the exchange rattled her, and she wondered if she should be worried about her job.”[27]

In 2009 Sandberg was named to the board of The Walt Disney Company.[29] She also serves on the boards of Women for Women International, the Center for Global Development and V-Day.[22] She was previously a board member of Starbucks,[30]Brookings Institution and Ad Council.

Other work and ventures

In 2008 Sandberg wrote an article for The Huffington Post in support of her mentor, Larry Summers, who was under fire for his comments about women.[31] She was a keynote speaker at the Jewish Community Federation’s Business Leadership Council in 2010.[32] In December 2010, she gave a TED speech titled “Why we have too few women leaders.”[33] In May 2011 she gave the Commencement Address at the Barnard College graduation ceremony.[34] She spoke as the keynote speaker at the Class Day ceremony at the Harvard Business School in May 2012.[35] In April 2013, she was the keynote speaker during the second annual Entrepreneur Weekend at Colgate University, in Hamilton, NY.[36] In 2015 she signed an open letter which the ONE Campaign had been collecting signatures for; the letter was addressed to Angela Merkel and Nkosazana Dlamini-Zuma, urging them to focus on women as they serve as the head of the G7 in Germany and the AU in South Africa respectively, which will start to set the priorities in development funding before a main UN summit in September 2015 that will establish new development goals for the generation.[37] In 2016, she delivered the Commencement Address at the University of California, Berkeley graduation ceremony. It was the first time she spoke publicly about her husband’s death, and stressed the importance of resilience.[38] The following year she delivered the Commencement Address to Virginia Tech‘s Class of 2017. On June 8, 2018 she gave the Commencement Address for the Massachusetts Institute of Technology in Cambridge, MA.[39]

Sandberg released her first book, Lean In: Women, Work, and the Will to Lead, co-authored by Nell Scovell and published by Knopf on March 11, 2013.

The book concerns business leadership and development, issues with the lack of women in government and business leadership positions, and feminism.[40][41][42][43][44][45] As of the fall of 2013, the book had sold more than one million copies and was on top of the bestseller lists since its launch.[46]

Lean In is intended for professional women to help them achieve their career goals and for men who want to contribute to a more equitable society. The book argues that barriers are still preventing women from taking leadership roles in the workplace, barriers such as discrimination, blatant and subtle sexism, and sexual harassment.[47] Sandberg claims there are also barriers that women create for themselves through internalizing systematic discrimination and societal gender roles. Sandberg argues that in order for change to happen women need to break down these societal and personal barriers by striving for and achieving leadership roles. The ultimate goal is to encourage women to lean in to positions of leadership because she believes that by having more female voices in positions of power there will be more equitable opportunities created for everyone.

Criticism of the book include claims that Sandberg is “too elitist” and another that she is “tone-deaf” to the struggles faced by the average woman in the workplace.[49][50] For example the book has been criticized for overlooking the struggles of mothers who may not be able to “lean in”. [51] Sandberg mentions both of these issues in the introduction of her book, stating that she is “acutely aware that the vast majority of women are struggling to make ends meet and take care of their families”[52] and that her intention was to “offer advice that would have been useful long before I had heard of Google or Facebook.”[53] Furthermore, following the Facebook and Cambridge Analytica data breach scandal, Sandberg’s willingness to actually lean in has been put into question. “She’s not leaning in at all,” McNamee said, in a reference Sandberg’s widely read book published five years ago. “If ever there was a time for her to lean in, this is it.” [54]

In her book, she does suggest other women to lean in during challenges.

…we’re failing to encourage women to aspire to leadership. It is time to cheer on girls and women who want to sit at the table, seek challenges, and lean in to their careers.[55]

Instead, she has been perceived as a COO who avoids engaging in this crisis.”Sandberg, the architect of the business model that is now the subject of so much scrutiny, has remained silent in public.” [54] In her book she recognizes those who do tackle crises:

I have the deepest respect for people who provide hands-on help to those in crises. It is the most difficult work in the world.[56]

Sandberg released her second book, Option B, in April 2017. Option B is co-authored with Adam Grant, a professor at the Wharton School of the University of Pennsylvania. The book puts emphasis on grief and resilience in challenges within life.[57] It offers practical tips for creating resilience in the family and community. 2.75 million copies have been sold since publication.[58]

In March 2014, Sandberg and Lean In sponsored the Ban Bossy campaign, a television and social media campaign designed to discourage the word bossy from general use due to its perceived harmful effect on young girls. Several video spots with spokespersons including Beyonc, Jennifer Garner, and Condoleezza Rice among others were produced along with a web site providing school training material, leadership tips, and an online pledge form to which visitors can promise not to use the word.[59][60][61]

In November 2016, Sandberg renamed her Lean In Foundation to the Sheryl Sandberg & Dave Goldberg Family Foundation. This new foundation will serve as an umbrella for LeanIn.Org and a new organization around her book, Option B. Sandberg also transferred roughly $100,000,000 in Facebook stock to fund the foundation and other charitable endeavors.[62]

Sandberg married Brian Kraff in 1993, and divorced a year later.[63] In 2004, she married Dave Goldberg, then an executive with Yahoo! and later CEO of SurveyMonkey.[2][46][64] The couple has a son and a daughter.[65]Sandberg and Goldberg frequently discussed being in a shared earning/shared parenting marriage.[66] Sandberg also raised the issue of single parenting conflicting strongly with professional and economic development in America.[67]

In May 2019 it was reported that Sandberg and Activision CEO Bobby Kotick had split after three years of dating.[71]

Sandberg supported Hillary Clinton for President of the United States in the 2016 presidential election.[74]

Former First Lady Michelle Obama said Sandbergs belief that women can always have it all is a lie. Its not always enough to lean in because that shit doesnt work all the time, Obama reportedly said.[75]

Sheryl Sandberg: Why we have too few women leaders, TED[76]