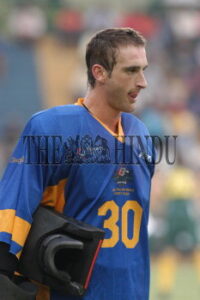 Stephen Mowlam OAM (born 22 December 1976 in Victoria) is a field hockey goalkeeper from Australia, who was a member of the team that won the golden medal at the 2004 Summer Olympics in Athens by beating title holders The Netherlands in the final.

He made his debut earlier that year during the Sultan Azlan Shah Cup in Kuala Lumpur, in the match against South Korea on 10 January. Mowlam is nicknamed Gimpy.