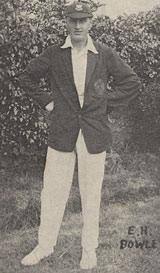 Edward Henry Bowley, born at Leatherhead , Surrey on 6 June 1890 and died at Winchester on 9 July 1974, was a cricketer who played for Sussex and England.

A forceful opening batsman, Bowley played just one season of regular first-class cricket before the First World War and was 30 when he resumed his cricket career in 1920. But for the next 14 seasons he was a reliable run-getter for his county and for the three seasons from 1927 to 1929 was among the heaviest scorers in the country. At 39, he was called up for two Test matches against South Africa in 1929, and the following winter he toured New Zealand and Australia with Harold Gilligan‘s MCC team, playing in three of the four Test matches against New Zealand. He scored 109 at Auckland.

Bowley shared in several big partnerships for Sussex, two of them still county records. In 1921, he put on 385 for the second wicket with Maurice Tate against Northamptonshire at Northampton. Against Gloucestershire at Hove in 1929, he hit an undefeated 280 in a day and shared a first-wicket partnership of 368 with Jim Parks senior. This Sussex record was beaten four years later when, with John Langridge, he put on 490 runs. This is the third-highest first-wicket partnership in England, the fourth-highest of all time and the eighth-highest partnership for any wicket in first-class cricket. In this partnership, against Middlesex at Hove, Bowley made his highest score, 283.