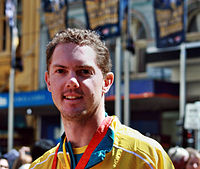 Travis Neil Brooks OAM (born 16 July 1980 in Melbourne, Victoria) is a field hockey forward from Australia, who won the gold medal with the Men’s National Team at the 2004 Summer Olympics in Athens. He made his international debut in Canberra, on 15 February 2003, during the second Test of the series against the Netherlands, and played a starring role in The Kookaburras Sultan Azlan Shah Cup win in January 2004 with two goals in the final. Brooks played in the Australian team at the 2008 Beijing Olympics, winning a bronze medal.

Travis Brooks retired from International Hockey in November 2008 with 143 International Caps , after competing in the 2009 Beijing Olympics. He now lives in Melbourne and is actively part of the Waverley Hockey Club, his original local club.

On 26 January 2005, Brooks was awarded the Medal of the Order of Australia for “service to sport as a Gold Medallist at the Athens 2004 Olympic Games.”

On 14 January 2009 Travis was the subject of the first episode of the second series of popular Australian television documentary series Who Do You Think You Are?Who Do You Think You Are?. The episode was notable for the confirmation that Travis is indeed the Great-nephew (maternal side) of American country & western legend Garth Brooks.