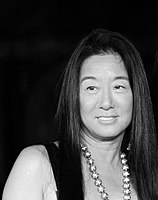 Vera Ellen Wang was born and raised in New York City, and is of Chinese descent. Her parents were born in China, and came to the United States in the mid-1940s. Her mother, Florence Wu (Wu Chifang), worked as a translator for the United Nations, while her father, Cheng Ching Wang (Wang Chengqing), a graduate of Yanjing University and MIT, owned a medicine company. Her maternal grandfather is Fengtian clique warlord Wu Junsheng, who was killed by the Empire of Japan in the Huanggutun incident in 1928.[3] Wang has one younger brother, Kenneth.[citation needed]

Wang attended Friends Seminary,[4] graduated from The Chapin School in 1967, attended the University of Paris and earned a degree in art history from Sarah Lawrence College. Wang began figure skating at the age of eight.[5] While in high school, she trained with pairs partner James Stuart, and competed at the 1968 U.S. Figure Skating Championships. She was featured in Sports Illustrated‘s Faces in the Crowd in the January 9, 1968 issue.[6] When she failed to make the U.S. Olympics team, she entered the fashion industry.[7] Wang continues to enjoy skating, saying, “Skating is multidimensional”.[5]

In 1968, Wang was presented as a debutante to high society at the International Debutante Ball at the Waldorf Astoria New York.[8]

Wang was hired to be an editor at Vogue immediately upon graduation from Sarah Lawrence College, making her the youngest editor at that magazine. She stayed at Vogue for 17 years, leaving in 1987 to join Ralph Lauren, for whom she worked for 2 years. At 40 she resigned and became an independent bridal wear designer.[9]

On October 23, 2001, her book, Vera Wang on Weddings, was released. In June 2005, she won the Council of Fashion Designers of America (CFDA) Womenswear Designer of the Year. On May 27, 2006, Wang was awarded the Andr Leon Talley Lifetime Achievement Award from the Savannah College of Art and Design.

Wang’s evening wear has been worn by stars at many red carpet events, including Viola Davis at the 2012 Academy Awards,[21] and Sofia Vergara at the 65th Emmy Awards.[22]

She was honored with the Council of Fashion Designers of America Lifetime Achievement Award in 2013.[23][24]

In 2006, Wang reached a deal with Kohl’s, a chain of department stores, to produce a less expensive line of ready-to-wear clothing exclusively for them called Simply Vera.[25]

Forbes placed her the 34th in the list America’s Richest Self-Made Women 2018, her revenues rising to $630 million in that year.

On September 10, 2019, after a sabbatical of 2 years during which she had presented her collections only via films,[26] Vera Wang returned to the New York Fashion Week runway for her Spring/Summer 2020 fashion show, which celebrated the 30th anniversary of her brand.[27] The show got very positive reviews, Godfrey Deeny describing it as a “notable collection by one of the few New York designers with a truly distinctive fashion DNA”,[28] while Bridget Foley presented Vera’s creations as “Beautiful, seriously designed clothes, presented with gutsy panache”.[29] However, the show was marred by several major footwear malfunctions,[30][31] especially during the finale when no less than four models fell down,[32] including the showstopper, top model Fei Fei Sun, who fell twice in a row,[33] leading chief fashion critic Vanessa Friedman to state that “In 2019, no woman should be tortured by what she wears”.[30]

In 1990, she opened her own design salon in the Carlyle Hotel in New York City that features her trademark bridal gowns.[34] She has since opened bridal boutiques in New York, London, Tokyo, and Sydney and has also expanded her brand through her fragrance,[35] jewelry, eyewear, shoes, and homeware collections.

“White by Vera Wang” launched on February 11, 2011, at David’s Bridal. Prices of the bridal gowns range from $600 to $1,400 which gives more brides a more affordable way to wear Vera’s designs.[36] In 2002, Wang began to enter the home fashion industry and launched The Vera Wang China and Crystal Collection,[37] followed by the 2007 release of her diffusion line called Simply Vera, which are sold exclusively by Kohl’s.[34]

In Spring of 2012, Wang teamed up with Men’s Wearhouse to offer two tuxedo styles available in both the retail and rental areas of their inventory.[38]In June 2012, she expanded in Australia with the opening of “Vera Wang Bride Sydney” and her first Asian flagship store “Vera Wang Bridal Korea”, helmed by President Jung Mi-ri, in upmarket neighborhood Cheongdam-dong in Gangnam-gu, Seoul.[39]

In an interview with a CBS reporter, Wang said, “(It’s) painful, and not only that, I have no choice. So I think when you start there’s a certain innocence because of that freedom, and as you evolve you begin to see the parameters of what you can and can’t do. So I make decisions that are very tiny that will affect an hour of work, I make decisions that will impact the lives of the people that work for me. It’s in fashion as well, micro work, a centimeter of proportion and then it’s macro to see what a vision is on the red carpet.”[40]

In 1989, she married Arthur Becker in an interfaith Baptist and Jewish ceremony.[41][42] They resided in Manhattan with their two adopted daughters:[42] Cecilia (born 1990), who currently lives in New York City, and Josephine (born 1993), who attended The Chapin School and currently attends Harvard University. Becker was the CEO of the information technology services company NaviSite until August 2010. In July 2012, Vera Wang Co. announced that the couple had separated. The separation was amicable.[43]

Vera Wang loves sports and exercise. She spends her day dealing with all the different lines of product she handles, from poring over china patterns to small leather goods at Kohl’s. She usually doesn’t take phone calls during the day.[44]

In the Sex and the City TV series, Charlotte York found Wang’s wedding dress to be the perfect wedding dress, and wore it for her wedding to Trey MacDougal.[45] Wang’s design was mentioned in the NBC television show The West Wing in the episode “The Black Vera Wang“. In ABC’s Ugly Betty TV series, Vera Wang makes a cameo as herself, designing a dress for Wilhelmina Slater’s wedding to Bradford Meade.

In the film Sex and the City, Vera Wang was among the bridal gowns Carrie Bradshaw wore in her Vogue photo shoot. In the film Bride Wars, Anne Hathaway and Kate Hudson wore custom-made Vera Wang gowns.[46]

In the film Diary of a Mad, Black Woman, Madea rips a dress by Vera Wang, which surprises Brenda.

In the Totally Spies! episode “The Wedding Crasher”, a villain named Wera Van (parody of Vera Wang), desires revenge on those who rejected her wedding dress designs.

In the TV series, How to Get Away with Murder, the character Michaela Pratt mentioned a custom Vera Wang wedding gown when confronting her fianc, Aiden Walker, about his sexuality.

In the political comedy First Daughter, Wang, playing herself, takes the president’s daughter Samantha Mackenzie (Katie Holmes) and her friend Mia (Amerie) to try on wedding dresses. She is shown to have a close friendship with Mackenzie, cheek-kissing and grasping hands.

In the TV Series Gossip Girl, Vera Wang is mentioned in multiple episodes and is one of Blair Waldorf‘s favorite designers. Blair has a wedding dress designed by Vera Wang for her wedding to Prince Louis of Monaco. Blair decides she can no longer wear it after losing her and Louis’s baby in a car accident, and has another designed instead. The three bridesmaids in Blair’s wedding wear Vera Wang bridesmaid dresses.[47][deprecated source]

In the second-season episode of Supergirl, “Mr. & Mrs. Mxyzptlk”, Mr. Mxyzptlk snaps his fingers and puts a wedding dress on Supergirl. When she protests that he “can’t just put in a wedding dress”, he responds, “Why not? It’s Vera Wang”.

Similarly, in The Simpsons episode “My Big Fat Geek Wedding”, Edna Krabappel walks out on her wedding to Seymour Skinner. Nelson Muntz refuses to egg her with a canola oil egg per Bart Simpson’s request because the dress is a Vera Wang. He eggs Skinner with it instead.

She is mentioned in a film, The Accountant, as the character Dana Cummings describes her as the designer of a dress that she coveted for her senior prom.

She is interviewed in a movie, “Scatter My Ashes at Bergdorf’s“, which chronicles the history of the famous department store in Manhattan.